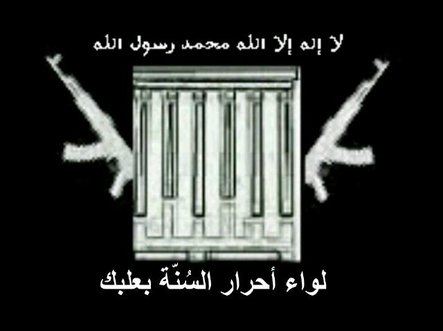 While ambiguity continues to surround the so-called Free Sunnis of Baalbek Brigade, Sheikh Sirajeddine Zouraykat of the Abdulllah Azzam Brigades said on Friday that the group's Twitter account as “fake” one run by sides affiliated with Hizbullah.

"The Free Sunnis of Baalbek Brigade is a fake account run by sides affiliated with Hizbullah and we should be cautious and avoid communicating with it,” Zouraykat wrote on his own account on the social media website Twitter.

Soon after, the Brigade replied to Zouraykat's claims.

“You describe us as an intelligence body just because we announced war on Lebanon's Christians,” the group tweeted.

“You are the ones working for the interest of foreign powers,” it added.

Free Sunnis of Baalbek Brigade then announced its “readiness to fight any group in Lebanon that dares to harm our principles and believes.”

The Brigade had vowed earlier this week to task gunmen to attack churches in Lebanon and in the eastern Bekaa valley in particular.

It said on its twitter account that a “specialized group of free jihadists were tasked with cleansing the Islamic state of Bekaa in particular and in Lebanon in general from the churches.”

Following these alarming tweets, Lebanese authorities contacted Twitter's administrators to communicate these threats with them and try to identify who is behind the account.

In the same context, the Internal Security Forces' cyber crimes bureau announced on Friday that the Twitter account of the vague Brigade is under prosecution.

"Authorities did not give much attention to this account before, but decided to act after its latest tweets on attacking churches,” she pointed out.

She said Lebanese authorities will coordinate with the Interpol to prosecute those operating the account, explaining that their doings are a punishable crime.

Al-Hajj revealed that the account was first activated on a Blackberry device on July 22, 2013 in London, but was later operated in several Arab countries.

According to the cyber crimes bureau's chief, two fake names have operated the account and they are Omar al-Shami, a former Syrian inmate who died in the Adra prison in the neighboring country, and Saifullah al-Shayyah, who does no exist.

In the past, the Brigade announced its affiliation with ISIL but the extremist group denied it.

On March 16, the Brigade engaged in a war of words with the al-Nusra Front in Lebanon, believed to be a local franchise of the Syria-based, Qaida-linked al-Nusra Front.

The dispute erupted after both groups claimed responsibility on Twitter for a deadly suicide bombing that rocked the Bekaa town of al-Nabi Othman.

The Brigade has claimed responsibility for several rocket and bomb attacks inside Lebanon, the last of which were the suicide blasts in Dahr al-Baydar and Raouche's Duroy Hotel.

The Free Wahabists of Baalbek terrorist Brigade needs to be caught, arrested, tortured, and executed by firing squad.

idiot, he said it right the first time, r u retarded?

The flagrant use of misdirection and smoke+mirrors in Middle Eastern propaganda has always been terrible, but these last few years have brought it to an all new low.

The "Free Sunni Brigades" are not real and errrrybody in Bekaa knows that. It is just a false-flag spook-show. Despite this all being a fabrication, it doesn't make the situation less dangerous.

As a Christian who has spent the better part of my life in Bekaa, I know my brothers and sisters better than that. I am not worried about any muslim (be they shiaa or sunni) burning down my churches. The community in Bekaa would not allow it. They have more honor than that.

This is absolute nonsense. I hope people are wise enough to know better.

....and shame on any and ever poster/troll on this site encourage this. Shame on you!

***I meant to say I know my MUSLIM brothers and sisters better than that. I know that they, as a community, would not allow anyone from Bekaa or to step into Bekaa and spread this kind of hatred. These are honorable people.

nobody takes this brigade seriously. They are the product of some intelligence agency trying to cause chaos.

The Lebanon we love
www.youtube.com/watch?v=tsg4l8HIdhU

Lebanon as seen by some people who love it's diverse culture
www.youtube.com/user/LiveLoveLebanon/videos

and as seen by the hateful narrow minded culture of the extremists, Jehadis, Takfiris and such..
https://www.youtube.com/watch?v=uv4FilpbJLk

always the first to comment cuz u have no life, u just wait like a loser behind a screen waiting for something against hezbollah, or any article and u apply hezbollah to it.

ur a stupid retard who has no friends and no life and ur dirty just like ur allies.

Bless anyone person, entity, or organization that inflicts pain, suffering, death and destruction upon u, and mostly suffering

Cheap logo + twitter account = instant "scary terrorists". They remind me of a couple suburban Sydney teens running a blog calling themselves "Anarchists Carnage Crew", 1.6m and 1.42m receptively less than 100kg combined socking wet. You can use one like a stick to hit the other one with, imagine them in a world of Anarchy.

What did I tell you yesterday? This was a bull shit group set up by Hezbollah to scare Christians int their camp for "protection". The Assad strategy used in Syria just duplicated for Lebanon. Shame on them all for even suggesting such slogans

It's bothersome how Christians are used by both sides, terrible.

Unfortunately neither side is believable, too many lies all for the sake of power and control.

Prime Minister Nuri al-Maliki said Monday that 90 percent of foreign terrorists who infiltrate Iraq did so via Syria. - 2009 09 01

All along the news (naharnet) & other news outlet have been getting the information from fake twitter accounts & making it headlines.

How far we go to make headlines. Cheap news gains nothing but fitnah playing into the hands of power hungry freaks.

All along the news (naharnet) & other news outlet have been getting the information from fake twitter accounts & making it headlines.

How far we go to make headlines. Cheap news gains nothing but fitnah playing into the hands of power hungry freaks.

will be revealed ? they've been revealed for ages...
Abu 3adass anybody?

since the USA is the biggest of all devils and the center of sin and anti-god and ... and ... and... and... How come u ignorants using their products such as twitter facebook ... etc?
or are u just selctive and a pathetic liar!? shouldnt you boycott all american products?