Security Raids in Search for Terrorists Carried Out Discreetly 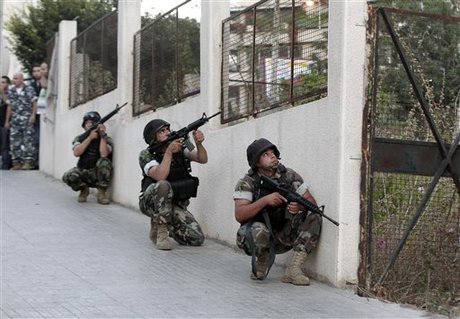 Security forces are carrying out raids away from media spotlight in several areas across the country in search for suspects, al-Joumhouria newspaper reported on Saturday.

The newspaper reported that raids are ongoing in an attempt to fortify “preventive” security in Lebanon and avert any possible threats.

The army has been actively raiding several Lebanese regions in search of fugitives involved in the planning and execution of terrorist operations around the country.

Al-Joumhouria said that security reports obtained by the Lebanese state showed that terrorist operations will increase in the upcoming period despite the exerted efforts to uproot dormant terrorist cells.

The army had raided the Afif al-Tibi street in the Beirut neighborhood of Tariq al-Jedideh two days ago in search of terrorist fugitives.

Strict security measures have been enforced recently after obtaining information on a plot to target hospitals and high-ranking security officials.

Troops had also raided the Napoleon Hotel in Beirut's Hamra street after obtaining information on the presence of the members of a cell planning terrorist attacks around Lebanon. Over one hundred people were detained and questioned, but only a French national was kept in custody.

I love it when hezbies living in sydney talk tough ... anyone would think u are a super power who has been here for hundreds of years! not working for israel the last 30years.

you still a gynecologist?