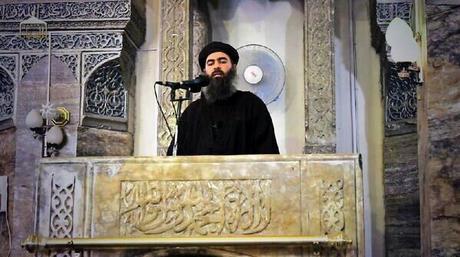 Self-proclaimed caliph Abu Bakr al-Baghdadi made an unprecedented appearance in the Iraqi city of Mosul, which his forces captured last month, ordering Muslims to obey him, according to a video posted Saturday.

That marks a significant change for the shadowy jihadist whose Islamic State (IS) group led a lighting offensive that has overrun swathes of five provinces north and west of Baghdad.

The onslaught has alarmed world leaders, displaced hundreds of thousands and piled pressure on Prime Minister Nuri al-Maliki as he seeks a third term in office following April elections.

The video showed a portly man clad in a long black robe and a black turban with a long graying beard addressing worshipers at weekly prayers at Al-Nur mosque in central Mosul.

"I am the wali (leader) who presides over you, though I am not the best of you. So if you see that I am right, assist me," said the man, purportedly Baghdadi.

"If you see that I am wrong, advise me and put me on the right track, and obey me as long as I obey God."

Text superimposed on the video identified the man as "Caliph Ibrahim," the name Baghdadi took when the group declared on June 29 a "caliphate," a pan-Islamic state last seen in Ottoman times in which the leader is both political and religious.

The video is the first ever official appearance by Baghdadi, says Aymenn al-Tamimi, an expert on Islamist movements, though the jihadist leader may have appeared in a 2008 video under a different name.

Baghdadi is believed to have been born in the Iraqi city of Samarra in 1971, and joined the insurgency against the U.S. military following the 2003 invasion that ousted dictator Saddam Hussein.

He spent time in a U.S. military prison and eventually took over leadership of a group, then affiliated with al-Qaida and known as the Islamic State of Iraq, in 2010.

At the time, the group was believed to be on the ropes, but Baghdadi led it back to prominence.

Last year, the organization expanded into Syria, becoming a major player in the war to oust President Bashar Assad.

Baghdadi subsequently cut all ties to al-Qaida, and his influence now rivals that of that group's global chief, Ayman al-Zawahiri.

IS is known for its brutality, executing and crucifying opponents, and photographs emerged Saturday showing its militants demolishing Sunni and Shiite mosques and shrines in Mosul and surrounding Nineveh province.

Iraqi security forces wilted when faced with the initial IS-led onslaught, and while they have since performed more capably, they have struggled to retake territory from insurgents.

An assault on Saddam's hometown of Tikrit has gone on for more than a week without retaking the city, while a suicide car bomb killed 15 people Friday near the sensitive shrine city of Samarra.

Maliki's security spokesman told Agence France Presse Saturday that ground forces commander Ali Ghaidan and federal police chief Mohsen al-Kaabi have both been sacked, the most senior officers to be dismissed since the militant offensive began.

Maliki, labelled at home and abroad as authoritarian and sectarian, insisted Friday that he would not give up on his quest for a third term. He pointed to his strong electoral mandate, in which his bloc won nearly three times more seats than its closest challenger.

His remarks came after a farcical parliamentary session in which Iraq's various factions -- many of which strongly oppose him staying -- failed to unite and choose a speaker.

That sparked criticism from abroad and from the country's top Shiite religious leader.

Further highlighting Iraqi disunity, the leader of the country's autonomous Kurds has called on their lawmakers to work toward holding a referendum on independence.

The Kurds' long-held dream of statehood has been advanced by the latest crisis, with their forces having moved into to take control of disputed territory they want to incorporate over Baghdad's strong objections.

I will not obey you or obey Khamanei.

good and neither will I. just note that khamenei never asked us that.

fascist: the actions and track record of da3esh confirm their words and declared intentions, while on the other hand both words and actions disprove your whimsical propaganda

rafehh made the comparison, and your comment doesnt make any sense.

and not a word from baghdadi on the israeli onslaught on gaza and the zionist lynch mobs roaming the streets of palestine looking for palestinians to beat, torture and burn alive.

you talk of "shame"? do you even know what word that means? from reading you i am convinced you havent the slightest idea.

as for HA they have proven they are true in their fight against zionism and for the arab cause.
da3esh is an israeli tool, created by CIA to divide arabs and have them kill each other, diverting them from their real enemy which is israel. even in their speeches they only speak of killing arabs christians, muslims and others, and "forget" to even mention israel. they are as fake and hypocrite as you paid posters on this forum.

thank you mowaten for always trying to include us christians in your defense. In all honesty, we don't need you or your terrorist party or ideology to include us as part of your argument.

What a handsome, pious man this Abu Bakr al-Baghdadi is. I'd bear his child any time.

you dont get to speak in the name of all christians ex-fpm, and you certainly dont get to tell me what facts i can state or not.

and congrats for exposing yourself by the way. if you really were a christian you would have been outraged at dae3esh's crimes, not at me denouncing them.

Normally Geagea call in every time a terrorists appointed himself. He did call Sabra, Jerba and all the Syrian-west appointed leaders.
Did he call Baghdadi yet?

They sent the CIA to get him, it is a matter of time before a bomb is dumped from the sky.

now would the real karim please stand up!!!

lebpatriot. You should kiss the ground that M14 walk on. And thank your God (whichever God you beleive in) that M14 merely exists. Else you would be wearing a black tchador and peeling potatoes in a black armed Hezbiran controlled country.

Lebanon first. Believe me, March 14 led by Sunni Saudi Harriri did not save Shia in Lebanon. Lebanese Shia by history and Shia in general evolve with time, unlike Sunni unstructured uncoordinated terrorists.

yes yes and you have evolved into a lovely young woman indeed!

This man has a spontaneous nystagmus beating to the left it might be a central lesion .he needs an urgent MRI and medical treatment

lebpatriot2333 stop that sectarian incitement, you're doing the same thing as joshbustani and it's disgusting as well as dangerous. falling into sunni-chia hate and strife is what our enemies want

as usual, false claims and accusations from the israeli shills who try to disrupt all debates here.

takfiri is not a sect or a religion smartie, it's a sick ideology of intolerance and murder. shame on anyone who does not denounce it, and even more on you for defending them.

These Sunni terrorists will never accept any other sect. It's time to get rid of them.

if you want to eradicate a sect you're no better then them. and these are not sunnis, they are takfiris, which are denounced by sunni scholars are heretics.

I don't see one Sunni scholar condemn these terrorists and reach out to Shia. Just like they never speak out against terrorism in the West. These Sunni scholars you speak of don't exist. They are waiting for a crazy psychopath like the subject of this article to take real control and they will follow.

go advise baghdadi to stop slaughtering people he deems kufars, see if he'll listen. cant believe how naive you are.

I agree this is another nasrallah or khamanei with different flavor.

Please bog john try some other sources than SANA and co.....

It's amazing how all the supporters of the Islamic Resistance on this website are non Shia. It seems the Party of God has a big following of Atheists and Secularists.

Your time is coming terrorist. You will be eradicated.

LOL, the February 14 Al Qaeda sympathizers are tripping over each other in happiness.

now would the real karim please stand up!!!

Not everyone has your binary thinking. ISIS (and its predecessors) were supported by the Iranian and Syrian regime because their interests converged. For example when ISIS was fighting the Americans in Iraq and when recently in their fight against rebel groups in Syria.

well he isn't the caliph for "all" Muslims, not the Shiites at least. He is however, the widely supported leader of the Sunni Muslims in Iraq - they should most definetetly heed his words. If Sunni Muslims want to support ISIL, they must bow to their new caliph, he put his life on the line so you could have an Islamic state. Just like Jesus did for Christians.

There was no Christianity prior to Jesus' death. If we follow your line of reasoning, we would rather bow for the Prophet Muhammad and follow his teachings. Jesus, Son of God, indeed warned us of the consequences of following false gods and prophets.

And exactly what Islam was there before Mohammed who just happened to come along over 600 years AFTER Jesus, who himself was 3,000 years after Abraham and Moses.

Bin laden has raised from the dead, it is a matter of time before they get to you buddy.
Why was he released from the US prison?
They executed Saddam Hussein because he threatened Israel and Iran, two nuclear states with fake stories of chemical weapons.

but they left the true bin ladems, al saud and other gulf terrorist infrastructures. all they did is wage war on the secularist dictators (qaddafi, assad and saddam). usa has deliberately left the savages in place for future roles, such as what we are now seeing in iraq.

It is about who, whether secular or not, is going against U.S. pecuniary interests in the region.

Nicely said. I am afraid if the Americans take a hold of his brain, the misguided amongst them may say it is a disease and try to find a cure.

Listening to some of you above, being justified in believing a proposition like, every time an Arab thug takes central stage in the Middle East is an Israeli tool and U.S. agenda created by CIA to divide Arabs and have them kill each other, diverting them from their real enemy which is Israel..." no more guarantees the truth than being justified in convincing someone guarantees the truth of such a proposition that the mere or compelling reasons why Arabs kill each other is the existence of agenda and the reasons behind him.

Iran through Maliki together know exactly what they're doing. Just as the 25% or so of so called Sunni Iraqi Security personnel dropped their guns and went along with the self-proclaimed caliph Abu Bakr al-Baghdadi because they knew that the Shiite government in Baghdad and Iran are not acting in their best interests, Malaki, in turn, had already accepted that co-existence with the Sunnis in Iraq with an umbilical cord tied with neighboring Iran is physically and logically impossible. This is what I think.

No offense to your parents, but what kind of Salafists call their kid "Vincent"?

You're really that backward?

Read carefully. Salafist, Khomeiniest and like minded dirt bags belong in the same place after taking out the garbage.

wolf: are you feeling any better these days? Have you applied for the new IS passport yet?

jerry - "why doesn't your nasrallah go defend gaza now and liberate it"
Last time we heard about it, the only people ruling Gaza was Hamas, and as you say Jerry, it's about time someone went and liberated the Gaza Strip from Hamas.

Paragraph writing is also a excitement, if you be acquainted with then you can write or else it is complex to write.