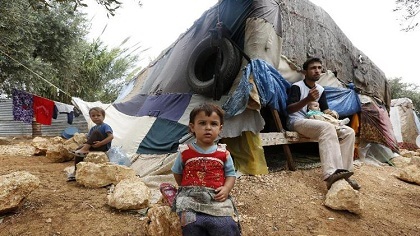 General Security chief Abbas Ibrahim believes that Lebanon will be eventually be forced to establish camps for the Syrian refugees in the country, reported An Nahar daily.

Political sources revealed that the Lebanon will “inevitably” be made to take such a decision, despite the opposition of Foreign Minister Jebran Bassil and other political powers.

The minister had warned on Friday that the camps may become entities independent of the state, similar to Palestinian refugee camps.

He had also cautioned that establishing camps may pave the way to the naturalization of the refugees, which violates the constitution.

Ibrahim stressed however that the camps, should they be set up, will fall under the security forces' “strict and complete” control.

The political sources told the daily that international law stipulates that refugee camps should be set up 30 kilometers inside the territories of the host country in order to ensure that the displaced are completely protected.

They added however that the concerned international powers and agencies are leaning towards decreasing the aid dedicated to Lebanon aimed at helping the refugees and directing it to Iraqi refugees fleeing a militant insurgency in their country.

Social Affairs Minister Rashid Derbas stated that the Syrian refugee file will be discussed at a cabinet session scheduled for next week.

He predicted that further measures will be taken in this issue, such as facilitating the return of refugees to their country should they choose to.

The United Nations says the country needs $1.6 billion (1.2 billion euros) for 2014 to be able to cope with the refugee crisis, but that only 23 percent of this has been gathered.

Why does Lebanon have to pay for the worlds wrong doings. It's enough these Palestinians are destroying our country and the Syrians were destroying it even when they were back home, now they are gonna be living among us. What more could possibly go wrong for this small country.

Geagea is well connected to the "Syrian Revolution." He should call the Caliph Baghdadi on this.
Since the refugees want an Islamic State, they should go and live there.

Make Saudi Arabia pay for everything. This is its problem.

Why are we FORCED to do anything? If all lebanese powers agree to not set them up, why would we be forced to set them up? are we stupid?

I know that FPM have a crusade against those camps. But also I dont believe Mustakbal or Kataeb or even HA want to set those camps up.
Do you have any source where one of them is talking for them?

If Lebanon has to establish camps for these refugees, it should demand that UNHCR be handed some, or most, of the money thrown into the limitless pockets of UNWRA in order to aid the 4th and 5th generation so-called refugees in Gaza as well as the Hamas terrorists.

let It be in Lebanon the same number of refugee camps(Palestinian ,Syrian)as much as all gulf countries were are brothers after all

Tragic fate for innocent Syrians. The terrorist Arab states of KSA, Qatar, UAE, and other gulf states use their terror networks to keep problems outside of their territories and the cash flowing in. At the same time, their pets Hariri, and GeaGea keep Lebanon in the Stone Age. You can say all you want about HA and Shia, but their cause is a just cause, not a pawns to protect the oil in the Gulf.

FD. I agree with this point. Useless extra emirati mall while their sunnite brothers are transforming our country into a garbage bin.

you still fluent in farsi?