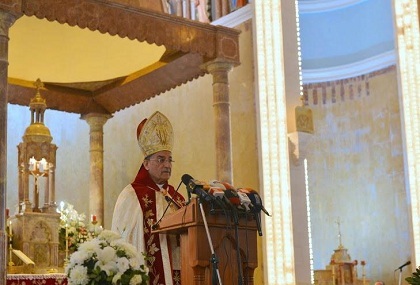 Maronite Patriarch Beshara al-Rahi condemned on Sunday the ongoing vacuum in the presidency, describing it as a “great shame”.

He urged during his Sunday sermon Speaker Nabih Berri to “hold daily parliamentary sessions to stage the presidential elections in order to end the vacuum in the presidency.”

“The daily presidential elections sessions have become obligatory according to the constitution,” he stated.

“We say to those obstructing the elections, whether directly or indirectly, and those backing them on the internal and external scenes, that they are incurring major damage on Lebanon,” he added.

“Lebanon does not belong to anyone, but it belongs to all the people,” he stressed.

“We call on friendly nations to urge the Lebanese parliament to elect a new head of state in order to preserve the country's role on the Arab and international scenes,” said the patriarch.

Eight elections sessions have been held, seven of which were boycotted by the March 8 lawmakers, mainly those of Hizbullah and the Change and Reform bloc, due to the ongoing dispute with the March 14 alliance over a candidate.

Head of the Change and Reform bloc MP Michel Aoun had repeatedly stated that he is willing to run in the elections if there is consensus over his nomination.

Lebanese Forces leader Samir Geagea is running on behalf of the March 14 camp and has repeatedly accused Aoun of obstructing the elections, demanding that he announce his candidacy.

“We say to those obstructing the elections, whether directly or indirectly, and those backing them on the internal and external scenes, that they are incurring major damage on Lebanon,”

Exactly, Daily Sessions and drag those parliament liars that during elections they go on TV claim to serve the people..
Berri is not doing his job as it is not urgent to elect the president but he will meet with Jumblat and decide on the parliament elections extension...
Berri will call daily session and tell them you either agree on a name or else the most voted name by this house is elected, Period and done.

...and Dr. Arreet 7akeh jumped into the arms of the Syrian occupiers while scheming with them against ebn balado after which he spent 11 precious years during which he learned nothing and came out worse than he could ever be. You need to be slapped to be brought back to your senses, if you still have any.

... perhaps then the day will come when the magical formula of 2+3=5 will no longer remain valid! Who said miracles don't happen in Lebanon?