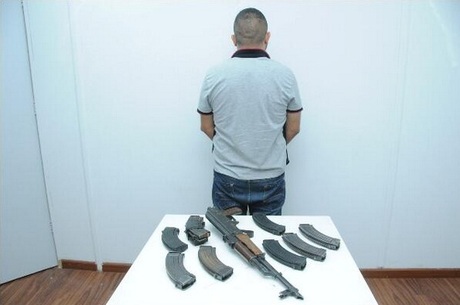 Security forces arrested Sunday the chief of a kidnap gang in the Bekaa town of Brital, as part of its still ongoing security plan in the region.

A statement issued by the Internal Security Forces' public relations department said the ISF Intelligence Bureau apprehended “the head of a kidnap-for-ransom gang, who is one of the most dangerous fugitives in this field.”

It identified him as 28-year-old Lebanese national Q. H.

He was arrested “during a raid on his house in the town of Brital,” where a Kalashnikov assault rifle and its ammunition were seized.

The man was “wanted by the judiciary on 16 arrest warrants over charges of forming an armed gang, abduction, theft, attempted murder, impersonation, drugs, shooting and bounced checks,” the ISF said in its statement.

“During interrogation, he confessed to carrying out several kidnap-for-ransom operations in the provinces of Beirut, Bekaa and South in collaboration with other culprits, who are being currently pursued,” it added.

The army and security forces have been implementing an unprecedented security plan since two months in the Bekaa and Tripoli, under which several top fugitives have been captured, especially in Douris, Arsal, Hawrtaala and Brital.

Notorious? Kidnap? Gang? Brital? Shia.... I refuse to believe it.

thugs and criminals no surprise there

Could it be Qassim Haidar?

It seems like Qowaten will have to move his H.Q. to Roumieh, I heard the are business cwntees and sofisticated communication, lots of support moral and technical there.

pictured above, a repenting flamethrower:)

Get the firing squads ready.