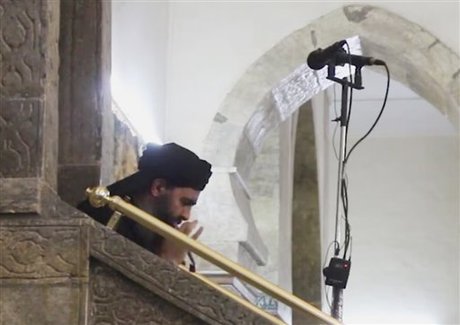 Iraqi forces are analyzing an online video that purports to show a brutal jihadist group's leader delivering a sermon in the militant-held city of Mosul, a spokesman said on Sunday.

The video, which if authenticated would be the first time the leader of the Islamic State (IS) has appeared on camera since proclaiming himself the leader of the world's Muslims, was apparently taken during Friday prayers at al-Nour mosque in the northern Iraqi city.

"We have specialized analysts investigating all of this."

The video posted on Saturday showed a portly man clad in a long black robe and turban with a thick graying beard -- purportedly IS leader Abu Bakr al-Baghdadi -- addressing worshipers at weekly prayers in central Mosul.

Superimposed text identified the man as "Caliph Ibrahim", the name Baghdadi took when the group on June 29 declared a "caliphate", a pan-Islamic state last seen in Ottoman times, in which the leader is both political and religious.

Militants led by IS overran Mosul on June 10 and subsequently seized a swathe of territory across five provinces north and west of Baghdad in an offensive that has displaced hundreds of thousands, alarmed the international community and piled pressure on Maliki as he bids for a third term in office.

how about you dear ultrahabib?

I bet he is cleaner