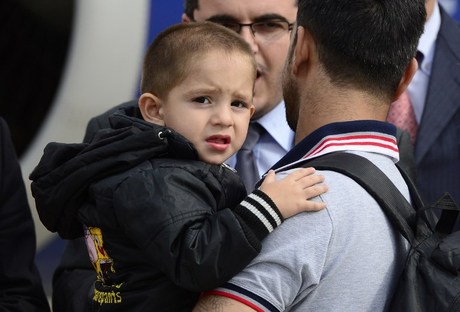 The impact of the refugee crisis on the daily lives of the Lebanese began growing after Syrians started working in fields that are banned for non-Lebanese amid fears they would be nationalized under international pressure.

The head of the parliamentary health committee, MP Atef Majdalani, told An Nahar newspaper published on Monday that Syrian doctors are illegally working at hospitals and clinics in the eastern Bekaa Valley.

He urged the Lebanese Order of Physicians to defend the rights of Lebanese doctor.

But Health Minister Wael Abou Faour said the authorities “stopped the violations after receiving complaints from the syndicate and from (Lebanese) doctors.”

He told the daily that Syrian doctors are banned from opening clinics or working at hospitals. But the authorities were only turning a blind eye to volunteers operating at clinics treating Syrian refugees in border areas and mainly the northeastern town of Arsal.

“We can't stop a physician from helping his compatriots,” Abou Faour said.

Labor Minister Sejaan Qazzi revealed, however, that Syrian doctors, assistants and nurses are not just working in the areas mentioned by Majdalani.

They are spread in other regions as well, he said, adding 47 percent of refugees form a labor force that competes with the Lebanese.

Majdalani told Voice of Lebanon (100.5) that there are no statistics on the number of doctors and nurses working in Lebanon.

There are over one million Syrian refugees in Lebanon. U.N. High Commissioner for Refugees Antonio Guterres warned last week that the spiraling crisis from Syria's civil war could pose a serious threat to Lebanon's security.

There are now 2.9 million Syrian refugees registered in the region, with 100,000 more added each month.

The crisis has had a severe impact on Lebanon's economy and has been worsened by alleged pressure exerted by the international community to place them in camps.

Most of the refugees are living with relatives or have established encampments in the mainly Bekaa region and in northern Lebanon.

Foreign Minister Jebran Bassil stressed last week that there is consensus among the rival parties of the government to reject the establishment of camps, saying such a move would result in the nationalization of Syrians.

Despite the clear stance announced by the authorities, U.N. officials have asked them to grant Lebanese travel documents to Syrian refugees, al-Akhbar newspaper reported on Monday.

The request came in response to a pressure exerted by the West, it said, without giving further details.

and the moral of the story is??

provide selfies, youtube videos, or iTunes clips to prove your accusation or forever shut up.

FT those countries are too busy wasting money on Malls of the World. No time for refugees and war consequences and such nonsense. Just fund some crazies to do the dirty work in Syria Lebanon and Iraq, get our people to go there and reap the benefits in their own countries.

Hizbelcharaf brought the bear to our back yard now we have to endure him!

Send these refuges back to just inside the Lebanese-Syrian border. We had endured so much over the past 60 years. Having these Syrians in Lebanon will change the balance of the Lebanese. These Syrians(Not all of them) will turn against the Lebanese government and People sooner or later. they need to be deported or sent to KSA or Qatar who are root cause of why these Syrians became refuges.

HA is the biggest threat to lebanon's present and future along with people like you ya hanoun.

If HA is lebanese then it must be Christmas today.

I know many Lebanese doctors who should be thrown in jail long before these "illegal doctors" but they're not because hey they're Lebanese and they have connections.
Justice only goes one way, and it doesn't seem like it's the right way.