Saqr Charges 28 with Belonging to ISIL 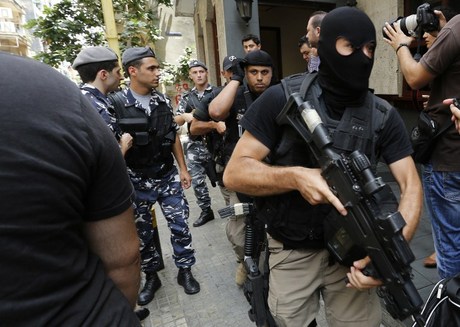 Government Commissioner to the Military Court Judge Saqr Saqr charged on Monday 28 people with belonging to the Islamic State of Iraq and the Levant, the state-run National News Agency reported.

The NNA said that seven suspects are already in custody.

They were detained in security raids on hotels.

The 28 felons are charged with belonging to ISIL, planning to carry out suicide bombings by using explosive belts and preparing explosive-rigged vehicles.

They are also accused of buying detonators, explosives, explosive belts and weapons and training suicide bombers to carry out terrorist acts in residential areas in the capital Beirut.

Over 100 people were interrogated during the security raid but only a Frenchman who is originally from the Comoros islands was arrested and has reportedly confessed to being sent by the ISIL to carry out a terrorist attack in Lebanon.

Because the Syrian regime on the hands of Emile lahud days ensured that our internal system is infested with Syria backed allied mukhabarat such as Baath,ssnp and ha. The system itself needs to be cleaned up.

as usual, flamethrower is always relevant and it believes it has a sense of humor.

As relevant as Jerry?

I thought they were one and the same.. what happened now you are separating them?

Ado, just random haha. No meaning, just meant to represent the multiple accounts this user has

Pajama freak, why don't you stop defending your cannibal terrorists and stop accusing the resistance with your delusions.

Why dont they release the nationality of the accused? Most are Palestinian, Syrian or Saudi.

I believe Rifi that Lebanese Sunni are not accepting or wanting these freaks attacking their fellow Lebanese. But they are in denial that these people are here. We can't just bury our heads in the sand... Non Lebanese religious extremists should be banned from entering Lebanon and every non Lebanese salafist should be exiled back to their place of origin.

Tex... Even though again irrelevant, yes this is inexcusable and undefendable. Even though they are more likely amal thugs, is just as irrelevant to your question. Those scum that were claiming to liberate baabda, should also be arrested and tought a lesson from our presidential guards! But are you seriously comparing those idiots to blood thirsty terrorists whose aim is to kill as many civilians as possible? The right wing Jews that ran through tel aviv streets chanting death to all Arabs and 12hrs later kidnaped and then burnt a 16year old palestinian to death as he walked to prayers in the morning...worse or the same or not as bad?

Tex... I'm not the defender or justifier of hezbollah.... I sick of repeating my thoughts over and over.But u seam to either ignor or forget my position. I want Hezbollah military to integrate with the LAF. I believe most Lebanese want the same including most Shiites that support hezbollah. I don't think this is possible by attacking them or isolating them. I believe its through defending them against Israel and foriegn attacks. You can't attack fellow Lebanese by siding with foreigners. This is treacherous. Jumblatt and other warlords might thnk this is acceptable but it aint! The LAF that defends all Lebanese from all threats is what I support and defend! The watan is our only hope and god bless the LAF and the people that serve our nation and The cedar on their baeray !!

Ado we all share your beliefs about integration through unity, but sexy texy has absolutely no interest in promoting that since he is on the Zionist payroll. This is obvious by his constant smearing of HA along with his minions ice-man etc...

i dont think saudis amount to much other then being suicide bombers.
what a useless breed.

Texas
You nailed it with wolfie. But u probably wont get an answer. His ilk does not yet know that HA is a milicia that took over our country with a soft coup, they are still drinking from the "HA is a resistance" cup.

Bravo Saqr , may more follow. It dont matter what party one belongs to. If its going to brainwash young men to volunteer to kill them selves and others all in the name crime then you don't deserve to be apart of civilization. The world needs more good men there is not enough of them unfortunately. Men who can do good for all humans of all cultures and spread love and good will not evilness among the masses. Hope other judges world wide also take this stance to wipe out evilness on earth.

This whole story about Daesh in Lebanon and the organized blow up seems very much of an ornagized set up by Syria/Iran who are behind Daesh. The aim is to scare the Lebanese and justify again and again the Iranian shiite hegemony. In the past the Syrian used the same technic by sending saiqa, fplp to scare and massacre the christians justifying the syrian occupation of lebanon.

What ISIL ya Nawfal Daou? What friggin ISIL? What a big lie, ya Nawfal Daou. Have you not heard Dr. Arreet 7akeh, who you respect as much as he disrespects you for being a hopeless jerk, say that these are revolutionaries? I hope and pray that the Doc of Bull send his Drs. Arteena Satleh to punish you by ending your manhood, and that by cutting off the middle finger of your right hand cause you deserve no punishment less serious than this!!!