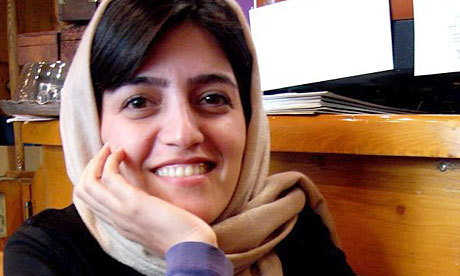 Iranian journalist Marzieh Rasouli said on Monday that she has been sentenced to two years in Tehran's notorious Evin prison and 50 lashes for publishing anti-regime propaganda.

Rasouli, respected for her work as an arts and culture reporter for leading reformist media outlets, including the Shargh and Etemaad dailies, was detained in January 2012 as part of a crackdown.

She was later freed on bail, but her incarceration -- shortly before a parliamentary election -- drew international condemnation led by the United States and France.

In a statement posted Monday on Twitter, Rasouli said she had been charged with "propaganda against the establishment and disruption of public order through participation in gatherings."

The first charge has been commonly used by Iran's conservative-dominated judiciary to convict activists and journalists since the disputed 2009 presidential election that triggered widespread anti-regime protests.

Rasouli suggested the sentence had been approved by an appeals court, without elaborating, only adding that "I have to go to prison tomorrow to serve my sentence."

Another reformist journalist, Saba Azarpeyk, has been in custody for more than a month since being detained, without being able to contact her family, her lawyer says.

Iran's President Hassan Rouhani, a self-declared moderate, has promised greater tolerance on social, cultural and media issues to the ire of hardliners who hold sway over several key institutions.

Conservative newspapers as well as reformist ones have faced temporary bans from the judiciary since Rouhani took office in August 2013, while three pro-reform titles have been permanently shut.

His name was hashem salman
And no investigation was even oppened for lack of proof...