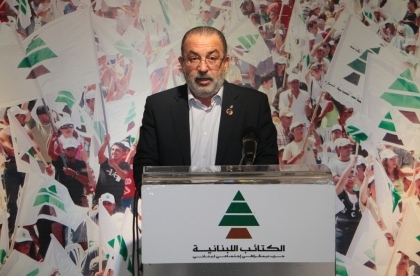 The Kataeb Party on Monday reiterated its “urgent call” for the election of a new president, calling on security agencies to “deal firmly” with the sectarian calls of the so-called Free Sunnis of Baalbek Brigade.

“The Kataeb Party expresses its utmost concern over the security, financial and social threats posed by the presidential election crisis … and reiterates its urgent call for the election of a president and approving a new electoral law for parliamentary polls that would ensure fairness and proper representation,” the party said in a statement issued after its politburo's weekly meeting.

“The party rejects the calls signed by the Free Sunnis Brigade and considers the matter to be very dangerous, whether they were issued by fundamentalist groups or fabricated by intelligence agencies,” Kataeb added, urging military and security forces to “deal firmly with this phenomenon” and Christians to “hold onto their land and church.”

Last week, the shadowy Brigade vowed to task gunmen to attack churches in Lebanon and in the eastern Bekaa valley in particular.

It said on its Twitter account that a “specialized group of free jihadists were tasked with cleansing the Islamic state of Bekaa in particular and in Lebanon in general from the churches.”

The Internal Security Forces' cyber crimes bureau announced on Friday that the aforementioned Twitter account is being probed.

Separately, Kataeb called on the government to “devise an urgent strategy to address the refugee crisis and control the ministers' performance and statements within a unified stance that reflects the executive authority's official viewpoint over this thorny matter.”

The party warned that the growing numbers of refugees could subject the country to grave perils.

It also condemned the latest Syrian airstrikes on the outskirts of the Lebanese towns of al-Qaa and Arsal, urging stronger military measures by the Lebanese Army along the border with Syria to prevent a scenario similar to the recent invasion of the Syrian-Iraqi frontier by Islamic State jihadists.

Because Aoun signing a deal with our occupiers (Syria) and turning his weapons on fellow Christians wasn't the downfall of Christian power?

General George Khoury, Lebanon’s ambassador to the Vatican, as a consensus candidate.