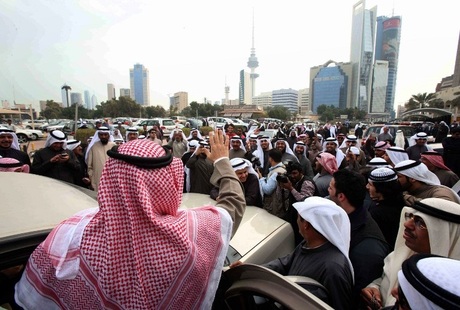 Prominent Kuwait opposition leader Mussallam al-Barrak sent a defiant message to the government hours after he was released from jail saying protests will continue in the oil-rich Gulf state.

"Putting us in jail will only strengthen our determination," Barrak told an opposition rally Monday night near the central prison where a number of activists are still detained.

"We will not stop protests until we achieve the elected government that comes out from ballot boxes," the nationalist leader told a cheering crowd celebrating his release.

Forming an elected government to replace the existing ruling family-led cabinets is one of the main demands for the Kuwaiti opposition groups which include Islamists, nationalists and liberals.

Barrak, a former MP, was freed from jail on Monday after a judge ordered his release following six days of detention on charges of insulting the judiciary.

During his speech at the night rally, Barrak repeated his criticism of the judiciary and warned them "not to challenge the Kuwaiti people".

After Barrak left the area, riot police fired stun grenades and tear gas to disperse the protesters who responded with small firecrackers. There were no reports of arrests or injury in the sixth straight night of violence.

Kuwait police clashed in the past five nights with opposition activists who were protesting the arrest of Barrak, rounding up over 50 demonstrators.

At a public rally last month, Barrak alleged that former senior officials, including ruling family members, had stolen tens of billions of dollars from public funds and engaged in money-laundering.

The scandal was later linked to claims that the same officials were seen in video footage plotting a coup.

Those allegations were made in a lawsuit filed last month by Sheikh Ahmad Fahad Al-Sabah, a senior ruling family member and former energy minister.

Sheikh Ahmad was himself questioned as a witness.

The new developments plunged the oil-rich emirate into a new political crisis following months of relative calm. Since mid-2006, the Gulf state was rocked by a series of political crises leading to dissolving parliament on six occasions.

Most opposition groups are not represented in parliament after boycotting a July 2013 election in protest at Kuwait's amended electoral law.