Berri: No Room for Extremism in Lebanon 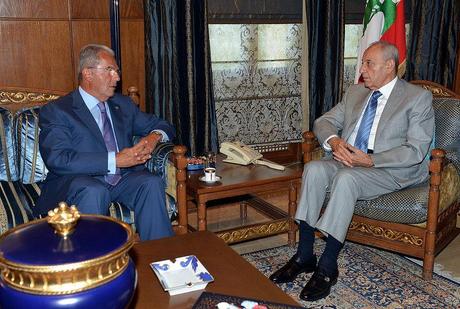 Speaker Nabih Berri hailed on Tuesday the role of security agencies in combating instability in Lebanon and the rise of terrorist networks, voicing his rejection of these groups.

He said: “There is no room for extremists in Lebanon because all factions in the country have shunned the calls to join their ranks.”

He made his remarks during a meeting with the head of the Maronite Council Wadih al-Khazen.

“Religion has nothing to do with these extremists,” added the speaker.

Meanwhile, the shadowy group of the Free Sunnis of Baalbek Brigades recently vowed to task gunmen to attack churches in Lebanon and in the eastern Bekaa valley in particular.

It said on its Twitter account that a “specialized group of free jihadists were tasked with cleansing the Islamic state of Bekaa in particular and in Lebanon in general from the churches.”

The Internal Security Forces' cyber crimes bureau announced on Friday that the aforementioned Twitter account is being probed.

the funniest ever berry! what does he call the shia extremism personified by hizbushaitan?

God bless Nabih Berri for his patriotic standing and support of our glorious resistance and his struggle against the zionistical forces of evil.

Is this an extremist..
http://www.youtube.com/watch?v=knAA-glMEEM

Lol @ terrorists gimps who want to compare cowardly Takfiri idiots to the saviors of Lebanon.

No you illiterate submissive red assed teabagging eunuch I'm just asking a question, the terrorist on his own's comparing himself to the cowardly Takfiri idiots.

Gimp go play with a suicide belt or something. You're as stupid as your Caliph.

What church? Go kneel before your Caliph the terrorist baghdadi

I'm sorry illiterate submissive red assed teabagging eunuch I shouldhave explained. A church is were we Christians go to pray, standing up like human beings not humping a carpet. I'm not surprised you've never heard of one. But it sure explains why your filthy terrorists occupied one in Lassa.

What do you call "Islamic" Republic of Iran and H.A.? I mean really? A group calls itself the party of god? What god? Whose god? What does god mean to you, and what has it meant to you for the past two thousand years? Did H.A. fill out a application and emailed it to God to get the permission to call itself party of god? Disgusting people from both sides.

No room for extremism but only contract killers hiding in Dahyé! With a long history in terror, stretching back to the eighites with their Iranian masters, in the art of blowing themselves up, under Saddam Hussein's tanks first, then blowing up the americans and french peacekeeping soldiers in Beirut in 1983, add to that the american embassy blowup, etc.. only to revisit the method they had perfected over the years, and exported to the world over with hariri's assassination, and all other political opponents…! Thanks Hassounah and Suleimani!