Change and Reform 'Will Not Accept' Alternative to Aoun's Initiative 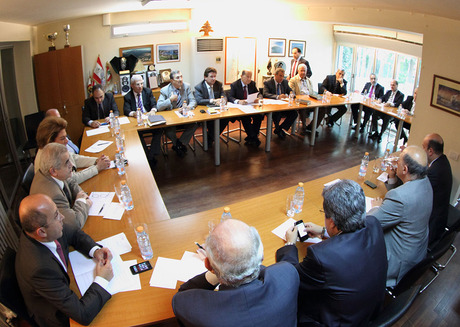 The Change and Reform bloc announced on Tuesday its commitment to the initiative launched by its leader MP Michel Aoun aimed at ending the presidential elections deadlock, rejecting the “rash” condemnations issued against it.

Former Minister Salim Jreissati said after the bloc's weekly meeting: “We will not accept an alternative to the initiative.”

He defended the proposal, while refuting criticism that it violates Lebanon's National Pact that calls for equal power-sharing between the country's Muslim and Christian communities.

“Those who believe that Aoun's initiative is a political maneuver are gravely mistaken,” he remarked, stressing that it adheres to the 1989 Taef Accord.

“The proposal is a reflection of the Accord and helps preserve its articles,” declared the former minister.

“Aoun made his initiative before it was too late. He sought to fortify Lebanon from future dangers,” he explained.

Moreover, Jreissati said that the initiative “will liberate the president from the clutches of foreign influence seeing as he will be elected by the people.”

He urged its critics to review the proposal once again before making “hasty” judgments.

Aoun called for a constitutional amendment that would allow the people to elect their head of state in an attempt to resolve the presidential deadlock.

Lebanese Forces chief Samir Geagea had accused his rival of deceiving the public and creating a media stir to win the backing of the rival Lebanese parties in the presidential elections.

“Aoun hasn't proposed a serious initiative. He created a media uproar to pressure the Lebanese parties into electing him as president,” he noted.

He reiterated that parliament can't make constitutional amendments amid a vacuum in the presidency.

Jarrasetna ya Jreissati, Aoun has been promising everyone and anyone who asked that he will never run unless he's the "consensus.. consensual.. constipated.. consorted.. candidate". Are you telling us that as a man of his word Aoun's actually excusing himself from running in an election based on his initiative because anyone elected through his initiative won't be a "consensus.. consensual.. candidate" not by a long shot.

But what about democracy mr Aoun and followers. You may be entitled to your opinion but you cannot enforce it.

Moreover if you want to go ahead with this initiative then start procedures for a constitution change not just send empty words.

Democracy is two wolves and a lamb voting on what to have for lunch. Liberty is a well-armed lamb contesting the vote.

Democracy is nominating yourself within constitutional timeframes and turning up to vote not obstructing until you worm your way in. And the m8 marketing dept are giving us lessons on democracy.
To all you aouniye's professing democracy, why haven't you practiced it so far?
Stop insulting the Lebanese people's intelligence with your bs rhetoric. You want democracy then show up and vote. Once there is a president and a proper parliament you will find everyone is with constitutional amendement to allow a public vote. But alas it is aoun or nobody now it is aoun's so called initiative or nothing. 3ayb 3un jud.

Flamer ya Zak Zak ente. My interpretation of democracy 3un jad? It wouldn't be the current democratic system we have in place now would it?? Another distortion of the facts by you. Question for you then. What would have happened had aoun had the numbers to run? Would this brilliant initiative seen light of day?
Wayn mababou l'7mor rbot sohbou.

Oh My!!! flamethrower believes in democracy:)))

"flamethrower--
and who told you i'm a fan of democracy, inbred?"

Freedom or nothing. Cry ad ma badkon and eat your hearts out Zionist sellouts. Our president will be chosen by the Lebanese and not by anyone else

The truth is this is being rejected because the Zionist and Wahhabi sell outs know that their candidate geagea will lose by a landslide.

The little man has spoken: He will not leave the Baabda Palace. He will hammer the nail in Hafez Assad's coffin, he will... oh wait!

Let us de-baptize Aoun, then he ll recover from his stuborness in wanting to be president

Wheres' the ASSad and Hizbo supporters? They can't post lies in Ramadan?

I guess they're counting on FT, to fill the void...

This is the problem. The zilm. The blind followers who rationalize and enable Aoun along his destructive path. He is a sick demented old man. But it is his followers who are not old or demented, who will not tell him "enough", that enable this party, misnamed, as "Change and Reform" to suspend government inLebanon. That party should be called "Unchanging and Deformed".

Democracy is two wolves and a lamb voting on what to have for lunch. Liberty is a well-armed lamb contesting the vote.

Christian rival leaders must be held responsible for the demise of Maronites in Lebanon. Aoun is well aware that to enact a constitutional amendment into Law is near impossible, especially with a deadlocked Parliament whose mandate has expired. Furthermore, the so called Maronite Production Team, should have known that presenting to many alternatives to the Muslim audience will only polarize the Shia and Sunni factions, hardening their respective positions, thus gradually diminishing the role of Maronites in Lebanon to a vanishing point.

Christian Politicians use terms such as Unity, the Cedars, Green and Beautiful Lebanon, as punch lines, to fill speeches that no one cares to hear any longer. The Lebanon that you Produced is Not United and no Longer Green.

When will the Lebanese Christians put an end to this FAG Production?

Of course they won't. Their fortunes are tied to Aoun's avarice and unbending ambition to become President. Supposedly, the Zilm will go to Baabda with him and loot the government and so of course they cannot move off of the mark that the zealot Aoun has set.
But they are all so stupid. If Aoun ever made it to Baabda, yes, he would loot the ministries, but only for the benefit of himself, his daughters and their husbands. All other FPMers will go begging. Aoun is for Aoun, ou bas. All others are being used. They should wake up and abandon this man before he abandons them.