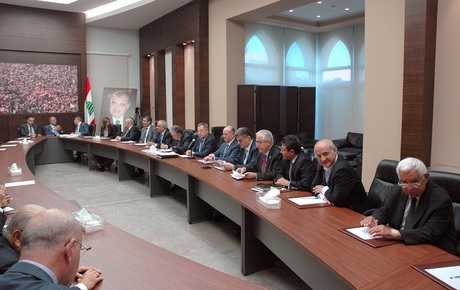 Al-Mustaqbal parliamentary bloc announced Tuesday that it is willing to take part in a parliamentary session aimed at issuing treasury bonds, noting that the payment of salaries to public employees and opening lines of credit are legal things that can be approved by the cabinet.

“It is legally possible to dispense these salaries and compensations and the legal authorization can come from the cabinet without the need to issue a new law,” the bloc said in a statement issued after its weekly meeting.

“Awaiting the approval of the 2014 state budget and to avoid paralysis at public administrations and institutions, the cabinet can issue decrees to open lines of credit,” the bloc added.

Turning to the possibility of issuing treasury bonds, or Eurobonds, the bloc said it does not mind taking part in legislative sessions dedicated to discussing “basic and pressing issues,” expressing readiness to facilitate the treasury's requirements.

On Monday, Finance Minister Ali Hassan Khalil appeased fears that civil servants would not be paid their salaries at the end of the month because of the paralysis of parliament.

Separately, al-Mustaqbal bloc reiterated its call for making the election of a new president a top priority, urging the March 8 forces to announce an official candidate.

Commenting on the unprecedented security plan in the northern city of Tripoli, the bloc lamented that “it was accompanied by violations,” noting that “several arrests were based on illegal memos.”

“Many arrests were based on investigations that took place under torture or physical and psychological pressure and resulted in charges of forming armed gangs or terrorism against young men who merely took up arms,” the bloc said.

Al-Mustaqbal also deplored the recent “military parade that Hizbullah staged in the Baalbek-Hermel region,” describing it as “a blatant affront against the state and its institutions and a negative message to the Lebanese interior and the world.”

“These practices aggravate the tensions in the country and create further complications,” the bloc warned.

An Nahar newspaper reported Tuesday that Hizbullah fighters moved military vehicles, cannons and rocket launchers at midday in al-Labweh, al-Ain and several other areas in the Bekaa near the border with Syria.

Sources said that the moves aim at confronting Syrian rebels on the Syrian side of the border.

Al-Mustaqbal also condemned the latest grenade attacks on businesses serving food during daylight Ramadan fasting time in Tripoli, calling them "a flagrant violation of law and attack on citizens' freedoms."

IS made a military parade through occupied Iraq, Hizb does one in occupied Lebanon. Al-Baghdadi made a public speech in Mosul, expect Al-Tehrani to do the same via Skype from his bunker, like usual.

No such a thing as "Shia Terrorism." It is an Iranian-sponsored terrorism in Lebanon, Syria, Iraq and Yemen.

And seriously ... The Hizb had a military parade. So what? They already occupy the country!

Israel, Saudi Arab, Kuwait, Jordan and USA all killing innocent people. See numbers killed in 24 hours and you will realize who are evil group if you think