Report: STL Threatens to Issue an Arrest Warrant against al-Amin 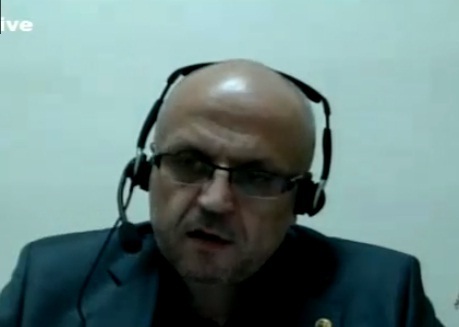 According to al-Akhbar newspaper published on Wednesday, Scott said in his request that al-Amin doesn't acknowledge the STL nor its rights to charge him.

Scott added that al-Amin had already published classified material and will not stop, noting that the editor-in-chief rejects to comply with the tribunal's decisions.

The newspaper reported that Scott called on Lettieri to demand al-Amin, who is also Akhbar Beirut S.A.L. representative, and their appointed lawyer Antonios F. Abou Kasm to attend the trial in person at the STL headquarters in The Hague.

“An arrest warrant should be issued against the accused if there was any necessity to bring him to testify before the tribunal,” al-Akhbar report said.

Earlier this month, head of the international tribunal's defense office Francois Roux assigned a Lebanese lawyer Abou Kasm to defend the accused in the case against Akhbar Beirut S.A.L. and its al-Amin.

Al-Amin withdrew on May 29 from the initial appearance in the contempt case filed against him by the STL.

Akhbar Beirut S.A.L. and al-Amin are charged with “knowingly and willfully interfering with the administration of justice by publishing information on purported confidential witnesses in the Ayyash et al. Case.”

An initial hearing for the two journalists and their media organizations was held on May 13 at The Hague.

The Hizb does not recognize any legal authority outside the Supreme Leader. We do not expect ultrahabib to be any different.

A thug in a suit is still a thug.

Amin use to say that but now he seems anxious and helpless...