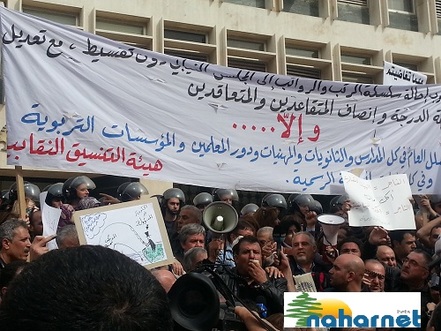 The Syndicate Coordination Committee held on Wednesday a general strike in all public institutions and warned during a 24-hour sit-in at the Education Ministry that there would be no academic year at schools across Lebanon if a controversial pay hike was not approved.

Head of the private schools teachers association Nehme Mahfoud said during the sit-in at the Education Ministry in Beirut's UNESCO area that teachers and public sector employees “are not wealthy.”

He accused the authorities of taking the country to the abyss. “Students want their diplomas … What is your responsibility in this country?” he asked officials.

“Speaker Nabih Berri should call for an urgent parliamentary session to address the wage scale, which is the only solution to the correction of exams,” Mahfoud said.

“There will be no academic year in September if the scale is not approved,” he said.

Education Minister Bou Saab struck a last minute deal with the SCC last month so that it does not boycott the exams. The teachers abided by the decision, but later announced that they would not grade the exams unless their demands are met.

Bou Saab said following talks with an SCC delegation on Wednesday that the country's “political crisis is affecting the education sector.”

He urged politicians to “put their disputes aside and look at the wage scale as a humanitarian issue.”

He also urged Berri to call on MPs to legislate to adopt a “fair” wage hike and “give the teachers their rights.”

“The officials are responsible for this crisis, which is affecting teachers, students and the entire society,” said the minister.

The SCC, a coalition of private and public school teachers and public sector employees, has repeatedly held strikes and demonstrations to ask for a 121 percent pay raise.

Parliamentary blocs have backed the public sector's rights but warned that Lebanon's ailing economy would suffer if the total funding was not reduced from LL2.8 trillion ($1.9 billion) to LL1.8 trillion ($1.2 billion).

The wage raise draft-law was not approved over their differences on the method to finance the scale without hurting the economy.

Hi, I doo think this is aan excellent web site.

I stumbledupon itt ;) I will return once again since i have bookmarked it.
Money and freedom is the best way to change, may you be rich and continue to help others.

They should sit on Aoun's head at Rabiah until he comes to his senses and allows the Presidential vote. By the Constitution, their salary demands cannot be met by the government until there is a government. The immediate solution is not at the Education Ministry, but at FPM headquarters, go there and don't leave until they agree to a solution to the Presidential issue.