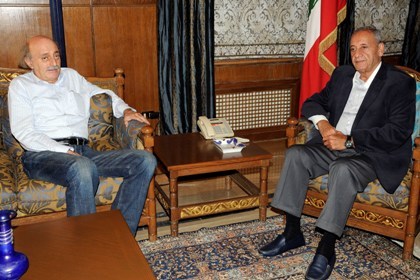 Political powers are leaning towards holding a legislative session to tackle the payment of salaries of civil servants, reported LBCI television on Wednesday.

Lebanese Forces MP Antoine Zahra had stated that he will take part in such a legislative session, but he will not attend one that will tackle additional spending.

On Monday, Finance Minister Ali Hassan Khalil appeased fears that civil servants would not be paid their salaries at the end of the month because of the paralysis of parliament.

Parliament should pass draft-laws allowing the government to approve treasury loans, but lawmakers have been boycotting legislative sessions over the vacuum at the presidency.

Al-Mustaqbal parliamentary bloc announced Tuesday that it is willing to take part in a parliamentary session aimed at issuing treasury bonds, noting that the payment of salaries to public employees and opening lines of credit are legal things that can be approved by the cabinet.

Geographically ,commercially and intellectually Lebanon and the Lebanese have the potential to become wealthy state and wealthy citizens.Unfortunately some 70 years ago a constitution has been architected to ensure division(based on religion)and discrimination between its people. This to ensure continuity of wealth and power of few feudals families. Ironically these families are puppets to foreign powers who regularly interfere in and determine the politics and the life and death of the Lebanese. May be one day in the coming 200 years the Lebanese will find out that it is not my Muslem,Christian, Druz modest neighbor who is creating my misery , but my traditional religious/political leader.

Looking at there faces ( not only these 2,but at the faces of almost all Lebanese politicians),one might wonder : Do they really think to be able to solve the problem(s)? don't they realise that they are the root cause of the misery? They are the cancer which should be amputated.