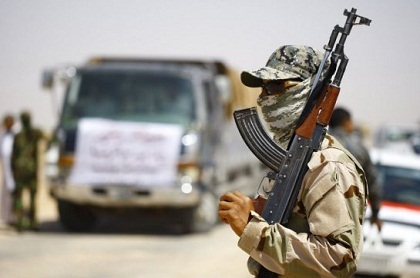 Iraq's Christian leaders called on the European Union on Wednesday to help the country avoid a civil war threatening the future of their "very fragile" minority.

Sako told a news conference he was "extremely anxious" about the fate of Christians, who are continuing to flee areas held by jihadist militants in the north, though they "so far have not been targeted as a group."

Archbishop Yohanna Petros Mouche of Mosul said the city had been all but emptied of Christians and both Chaldean and Syrian Orthodox churches occupied by insurgents.

Some 35,000 Christians lived in Mosul in 2003 before the U.S. intervention but the numbers have been on the decline ever since.

Iraq's Christian community is a shadow of what it used to be -- once more than a million nationwide -- with upwards of 600,000 in Baghdad alone, there are now fewer than 400,000 across the country.

Many of those left still lived in Nineveh province, of which Mosul is the capital.

"We are a very fragile minority as we have no army, no militia," Sako said.

He appealed last weekend in Kirkuk for the release of two nuns and three orphans who have been missing for several days in militant-held areas of northern Nineveh province.