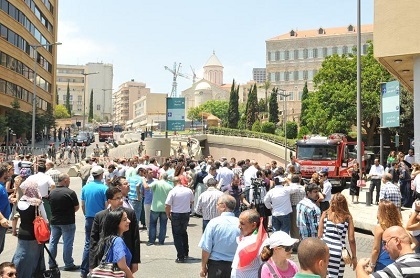 The cabinet met on Thursday to discuss thorny issues, including the controversial employment of Lebanese University’s contract workers and the appointment of deans.

The government however chose to postpone tackling the LU file after the ministers of the Progressive Socialist Party, of MP Walid Jumblat, insisted on the appointment of a Christian official in the post of dean of the medical school.

The discussions will consequently be postponed for a week.

Social Affairs Minister Rashid Derbas said after the cabinet session: “Nothing has been decided on the LU file and we will not separate between the full-time employment and the University Board of Deans.

“The main problem in the LU file lies in the PSP ministers' insistence that Dr. Antoine Yared be appointed dean of the medical school,” he revealed at the session that was held at the Grand Serail.

The LU file was on the government's agenda last week but was postponed until Thursday after reservations expressed by the Kataeb Party and PSP.

According to An Nahar daily, Kataeb had objections on the appointment of deans and an “initial conviction” on the full-time employment of contract workers.

The PSP, on the other hand, did not reject the appointments but expressed reservations on the fact that the number of contract professors targeted by the decree has risen from 700 to around 1,100.

Jumblat told As Safir newspaper that the PSP ministers – Wael Abou Faour and Akram Shehayyeb – will make a proposal during the cabinet session to “please the professors and protect academic levels” by having employees that satisfy the required criteria.

The PSP leader refuted claims that he was hindering the adoption of the decree, saying he wanted to have “efficiency.”

“There should be a minimum level of academic efficiency particularly after the number of proposed employments rose to 1,100,” he said.

Education Minister Elias Bou Saab, who has proposed the decree, told As Safir that he was holding onto his “attempt so rescue the LU.”

He said he was ready to provide explanations if the decree had flaws. “Is it possible for us to disagree on numbers?” Bou Saab wondered.

Studies showed that the “LU needs the full-time employment of 1,700 workers ... at a time when we haven't exceeded 1,100 teachers,” he said.

The minister told As Safir that differences on the appointment of deans was sectarian.

“Some parties wanted to appoint certain judges from certain sects. We overcame this issue … and satisfied all sides but I don't know where the problem lies now,” he said.

Public schools and the LU “are paying the price of the political cold war,” Bou Saab added.

Their protest was aimed at pressuring the ministers into approving the decree.

Bou Saab left the cabinet session to address the protesters. He told them “there is no longer any problem in the full-time employment.”

The differences among cabinet members lie on the appointment of deans, he said.

PSP fighting for a christian dean? I love this non sectarianism... refreshing...

Nothing but failure after failure...
Every 2 years, Parliamentarians vote themselves a pay raise, UNANIMOUSLY, arguably to alleviate cost of living and inflation, seemingly affecting Leb politicians..