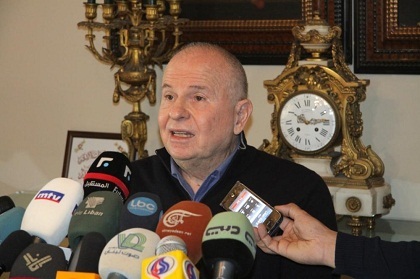 The Islamic National Gathering slammed on Thursday the “arbitrary arrests targeting the sons of Tripoli” in northern Lebanon, warning that the “oppression of the Sunni sect will result in unexpected reactions.”

"We reject the arbitrary arrests of Tripoli's sons and we hold the Attorney General of the court of cassation and the judges fully responsible for any Sunni's detention,” al-Mustaqbal bloc MP Mohammed Kabbara announced after a meeting with the northern city's figures.

Kabbara warned that “the continuous security oppression of the Sunni sect will lead to unexpected reactions,” and deplored the campaigns against Ameed Hammoud.

Hammoud was one of those who funded the Bab al-Tabbaneh fighting frontier's leaders in Tripoli and he is believed to be close to al-Mustaqbal Movement. But after the arrest of the fighting leaders, they accused Hammoud of turning his back on them and abandoning them.

The al-Mustaqbal MP also called for treating the detainees “according to the law and for taking into consideration citizens' defense of their homes” and demanded transferring them out of the “inhumane” al-Rihaniyeh military prison of Baabda.

"Only military personnel should be held in al-Rihaniyeh, according to the law, and it is not suitable for civilians,” he noted.

But he called on the city's residents not to resort to blocking roads and roundabouts.

Nevertheless, Kabbara also assured that the conferees hold onto the security plan that succeeded in achieving a ceasefire in Tripoli.

Al-Mustaqbal bloc had said on Tuesday that many of the arrests in Tripoli were based on investigations that were conducted under psychological and mental pressure, considering that this resulted in launching accusations of terrorism against people “who were merely tasked with carrying guns.”

psychological and mental pressure? torture by the army intelligence? False confessions? This cannot be..... I refuse to believe it.

Mr machnouq said that the control of da3ech of parts of irak made their affiliates breathe in Lebanon
your absolutely right , voila the stooge of the funder of da3ech raising his voice

Oppression of Sannis will definitely stop as soon as they clean themselves of the sanni stench and try hard to stop their inherent lunacy with some drastic measures even though this last one is almost impossible to achieve.

Sannis, stop wining and start blowing yourselves up among yourselves. It only saves time and maximizes the benefits.

I can't understand why this Rat Kabbara is still not in jail. He should grow his beard and shave his mustache for him to be an original salafist. He's just missing the looks

u should also change your name to Rat rather than jerry ;)

why should leave our land, why can't you leave to the million other christian countries in the world? In case you were shiite, you could also go live in Iran.