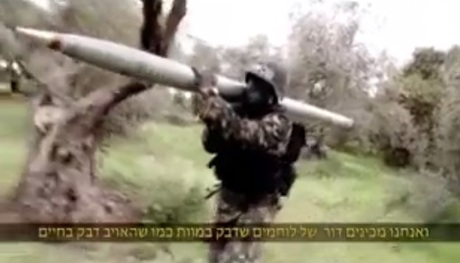 Hamas has posted a Hebrew version of one of its battle songs in the latest act of psychological warfare accompanying the physical conflict with Israel.

The original Arabic version of "Shake Israel's Security" has long been a popular anthem of the Islamist movement's military wing, the Ezzedine al-Qassam Brigades.

Now the Hebrew translation is on the brigades' YouTube site, proclaiming to a dramatic orchestral accompaniment: "Wipe out all the Zionists...burn soldiers and their bases."

"Exterminate the cockroach nest, expel all the Zionists," it exhorts.

The video, which was posted on Thursday, can be viewed on https://www.youtube.com/watch?v=HiUWgWjL24U&feature=youtu.be

Israel and Hamas have since Tuesday been locked in a spiraling war across the border between southern Israel and the Gaza Strip, where Hamas has its power base.

"They are startled by death and hide behind walls and protection," the brigades' song jibes. "Rain upon them many rockets. Make their world into a horror."

Israeli air defenses shot down three rockets over Tel Aviv on Friday, and Hamas said they had been targeting Israel's main international airport just outside the city.

Ben Gurion airport closed briefly during the raid before resuming operations as normal.

The al-Qassam Brigades was quick to urge foreign airlines against using Israeli airports.

"We are sending a message to all foreign airlines operating flights into the Zionist entity, asking them to stop flying into the entity because of the dangers surrounding all the airports due to the ongoing war," it said in a statement.

Earlier in the week, bogus messages purporting to come from mainstream Israeli media announced 25 dead in a rocket attack on the northern port city of Haifa, where there have so far been no confirmed hits.

Almanar must have assisted in the making of the clip.

hamas and hizb have the same boss...

coz before it was on the edge of liberating alqods...
better be qatar's lackey than khamenei's minion...