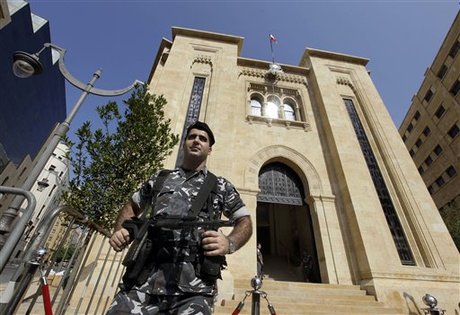 A meeting was held between officials from the Mustaqbal and the AMAL movements regarding the payment of salaries of civil servants, reported al-Joumhouria newspaper on Saturday.

Sources said that a “preliminary” agreement was reached between the two sides.

Finance Minister Ali Hassan Khalil attended the meeting representing the AMAL Movement, while the Mustaqbal Movement was represented by the head of its bureau Nader Hariri.

The agreement calls for limiting legislation at parliament to approve the most pressing issues, especially providing the salaries of civil servants and agreeing on the contentious new wage scale.

A meeting was held earlier this week between Khalil, Hariri, and Health Minister Wael Abou Faour regarding the case of civil servant salaries.

The talks were a product of a mediation by Progressive Socialist Party leader MP Walid Jumblat between the Mustaqbal and AMAL movements.

The mediation was launched soon after the MP returned from a trip to Paris where he had met head of the Mustaqbal Movement MP Saad Hariri.

The mediation calls for providing the constitutional quorum needed to hold a legislative session to approve pending issues at parliament, said al-Joumhouria.

Further meetings will be held between the Mustaqbal and AMAL movements until a final understanding is reached over this issue.

The agreement will then be relayed to members of the March 14 alliance, while Khalil pledged to do so with AMAL's allies of the Free Patriotic Movement and Marada Movement.

On Monday, Khalil appeased fears that civil servants would not be paid their salaries at the end of the month because of the paralysis of parliament.

Parliament should pass draft-laws allowing the government to approve treasury loans, but lawmakers have been boycotting legislative sessions over the vacuum at the presidency.

The Mustaqbal bloc announced Tuesday that it is willing to take part in a parliamentary session aimed at issuing treasury bonds, noting that the payment of salaries to public employees and opening lines of credit are legal matters that can be approved by the cabinet.