Geagea: We Must Begin Holding those behind Deadlock Responsible for their Actions 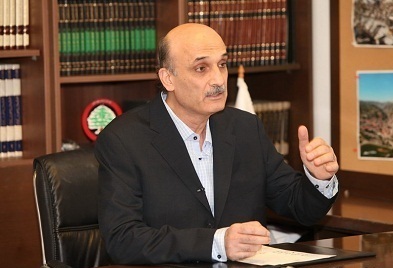 Lebanese Forces leader Samir Geagea condemned on Friday the ongoing vacuum in the presidency, saying that the situation should not continue as it is, said the LF media office in a statement on Saturday.

Geagea said: “We must begin holding those behind the deadlock responsible for their actions.”

“We will risk prolonging the status quo if we fail to take any action to rectify the situation,” he said before an LF-hosted dinner.

“The Lebanese people have the power to either change the political class or not take any action and keep the situation as it is,” he added.

Geagea justified the LF's refusal to take part in the cabinet, noting the “state's absence in tackling the people's daily problems.”

“Those responsible for the absence of the state are obstructing constitutional institutions, starting with the presidency, cabinet, and parliament,” he remarked.

“It is true that we are facing several problems, but that does not mean that the situation is impossible to handle,” he added.

“We still have the solutions and we should decide our fate by ourselves,” he demanded.

“Each citizen must therefore carefully consider the situation and rectify it at the first democratic opportunity he gets, such as the parliamentary elections,” explained the LF chief.

“Those obstructing political life must be kicked out of it because they are hindering democracy, state institutions, and the interests of the people,” he said.

Head of the Free Patriotic Movement MP Michel Aoun has repeatedly announced that he would run in the elections if there is consensus over his nomination.

Geagea, a presidential candidate himself, has repeatedly called on the March 8 alliance to name its candidate, holding the FPM responsible for the obstruction of the presidential elections.

We, the People want the right to vote for our President. It is not up to Saudi Arabia, America or Syria to dictate our future and the future of how our President should be elected. To hell with you geagea and your masters in Riyad, Kuwait City, Paris & Langley. You're a criminal, junkie and murderer and should be ashamed of your past and history. You have the blood of Lebanese and Christians in particular on your hands. We will never forget your actions! You should be ashamed of yourself mr. All you have wanted all your life is to be the leader of the Christians...and the only way you thought you could get their is as your masters have taught you which is via the sword. Well not any more sunshine...times have changed. It's a pity you haven't...even after 11 years in solitary confinement.

Amen, the only true lebanese left.

Do you need mapquest to get the parliament ? Go there and vote bonehead.

Ignore him, he is a mental case.

What was Geagea trying to prevent during those years?

And by people I mean Israel

Blabla he is the people's choice, but he refuses a direct vote :P walaw

would you accept a direct vote by the people of lebanon whether they want your sectarian militia? I thought so..

Wouldnt electing a president who wants to get rid of them be the same thing. Go to the polls and stop barking. Yalla

another one of those!!