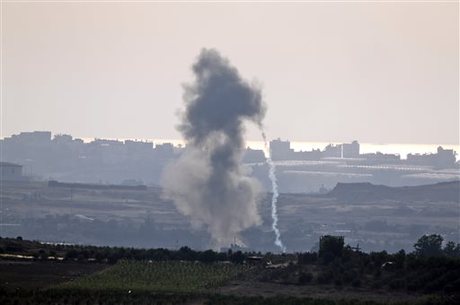 For its part, Al-Jazeera TV said rocket attack sirens wailed in Tel Aviv and the northern areas of Haifa, western Galilee and Nahariya.

A series of air strikes targeted several areas in the Gaza Strip soon afterwards, according to Al-Jazeera.

The Israeli army said two Gaza rockets were shot down over the greater Tel Aviv area by the Iron Dome anti-missile system, after at least three explosions shook the area.

Overnight, Israeli navy commandos launched a ground operation in the north of the Gaza Strip, the first since the offensive against Hamas began, Israeli public radio said early Sunday.

The brief incursion targeted a rocket launcher site, it said. The armed branch of Hamas confirmed that Israeli commandos had exchanged gunfire with some Palestinian fighters.

A military spokesman later said four Israeli soldiers had been lightly wounded during the operation.

"During the mission a gunfight broke out, started by some terrorists operating at the site, during which four Israeli soldiers were lightly wounded," said the spokesman who declined to give further details on the operation.

The Ezzedine al-Qassam Brigades confirmed the exchange of gunfire "between our fighters and soldiers of the Zionist navy which tried to penetrate the zone of Sudanyia" in northwest Gaza.

It was the first ground operation in Gaza by the Israeli military since the start of its offensive on Tuesday.

Israeli strikes on Gaza killed a teenager and a woman on Sunday, medics said, raising the overall death toll to 166 as the punishing air campaign entered its sixth day.

Shortly afterwards, another strike killed a woman in the Maghazi refugee camp in central Gaza, he said.

A man was killed in a raid on Beit Hanun in northern Gaza, where the Israeli army has warned it will sharply escalate its offensive and had urged residents to flee.

Elsewhere another person succumbed to injuries from an earlier strike, Qudra said, giving an overall toll of 166 dead.

More than 1,000 people have been wounded.

Witnesses in the southern city of Rafah also reported seeing gunmen killing a man in the middle of the street in what appeared to be the execution of someone suspected of collaborating with Israel.

There was no immediate claim of responsibility from any of Gaza's armed factions.

Saturday was the bloodiest day by far of the operation, with 52 people killed.

The deadliest strike was in Gaza City just before midnight (21:00 GMT) in the eastern Tuffah district where 18 people were killed in strikes that hit the house of Hamas police chief Tayseer al-Batsh and a mosque, medics said.

Batsh survived but was reportedly in critical condition, with around 50 people wounded in the strikes.

Since then, approximately 660 rockets have hit Israel, while another 173 were intercepted by the Iron Dome air defense system, the army said.

On Sunday, 30 rockets struck Israel, while another five were shot down, a spokeswoman said.

No Israelis have been killed, and only three people have been seriously wounded since the start of the operation, one them a 16-year-old boy who was injured on Sunday during a strike on the coastal town of Ashkelon, medics said.

By Sunday morning, the Israeli military said it had struck 1,320 "terror targets" across Gaza, including 735 rocket launchers, 64 training bases and militant compounds, and 32 Hamas leadership facilities.

More than 20 targets were hit overnight, the army said.

Hamas has burned its bridges with HA, perhaps they will get HA support back once the palestinians stop being sell outs for the dollar or stop being stupid enough to fall into Israeli and Arab trickory. I have a hunch Hamas was misled into believing that if they abandon Assad and HA then that would be a catalyst for peace negotiations. Some kind of peace negotiations that turned out to be.

Lets hope this violence doesnt spread to Lebanon, but for all we know, Lebanon might be the real end goal of this operation. We all know that Israel would never accept the defeat of 06.

Cityboy: Israel been defeated in 2006? well let's see, how many casualties were in Israel and how many in Lebanon? what about the hoses, bridges roads destroyed and why the rat with the hat still underground?

anonytexas, i thought you were lebanese but it seems you can't say anything bad about Israel. You are too funny.

Hamas needs to accept that they are a failure and should surrender immediately to spare further casualties among their people.

I am afraid that Israel will turn the table against the Iranians by attacking H.A. in Lebanon while they are vulnerable being engaged in Syria. We are yet to see if Israel will change the current direction the Middle East is headed by attacking Iran which will ease the minds and satisfy the oil producers in the Gulf region. How is that going to change and benefit the Palestinian cause, the refugee camps, and the heavy burden shouldered by Lebanon? Not to the better. I assume the Palestinians will go to the negotiating table with less bargaining power which means good luck getting rid of the Palestinians camps from Lebanon.

This fabricated war has Iran all over it. I posted the following couple of days ago: "The 20th of July 2014, is the deadline for the Iranian nuclear agreement. With Middle East igniting with war from Iraq to Palestine/Israel, there is no meaningful chance that it will be concluded and all the reasons that it will be postponed once again which will again buy the Iranians more time to meet their goals." Today, it is reported: "Iran and U.S. say big gaps remain as deadline looms for nuclear talks." Clever Iranian foxes outsmart the Arabs again. As the Sunnis in Lebanon used the PLO as their army, Iran has provided credulous Hamas with made in Iran heavy weaponry and is now using them as a tool to further Iranian interests under the false hope that they will deliver more than a true and lasting peace agreement would otherwise secure for Palestinian future.

Iran will reach a nuclear deal and Israel's strategy of escalating war to HA will come to a halt. The losers will be Hamas and unfortunately innocent Palestinians as the next war front will be the Islamic Caliphate of Baghdadi.

No disbanding of HA but implementation in LAF.

anonymetexasusa, it is hard to say if a nuclear agreement with Iran is more likely than not. Assuming that it does happen, your proposition re. what and how much Iran is willing to give up for its nukes is the best explanation out of the several scenarios that I can think of. Either way, H.A. is short lived. A true Lebanese resistance is one that sacrifices itself for the betterment and longevity of the wattan I have a feeling that the resistance was hijacked during its honeymoon

HA will remain with or without Iran's support. It is not short lives and will prove everyone wrong no doubt. However I find it interesting how March 14 feel HA will one day disappear. This will never happen because it is within the fabric of Lebanon now. It's better to accept HA and negotiate trade offs for a better Lebanon than to hope for a Sunni savior.

Why don't you go ahead and tell your bosses then? Terrorist gimp!

So you admit that terrorists in Isis are your Kin. Very important step to rehab Tex.

The difference between Hamas is that Israel built the Iron dome anti rocket units to protect its cittizen while Hamas using its citizen to protect their rockets.
Now why don't you condemn Israel for that.

HA is fighting terrorists who drew first blood on Shias in Syria and threatened Lebanese Shia they were next. Hamas turned it's back on HA despite years of cooperation. Hamas always chooses the wrong side and now must suffer consequences. This has nothing to do with Assad.