Al-Rahi Lashes Out at MPs, Describes Situation as “Tragic” 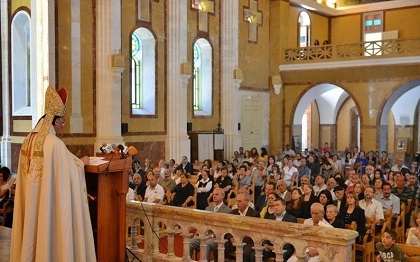 Maronite Partirach al-Rahi lamented on Sunday the presidential impasse, stressing that he rejects the “tragic” situation that has reached its peak.

“We refuse to accept the tragic situation that has reached the peak as the state is deprived from its president,” al-Rahi said during Sunday's sermon in his summer seat of Diman.

“Until when are they going to neglect their dangerous and honorable constitutional duty of electing a new head of state,” al-Rahi wondered.

He expressed regret over the “ongoing constitutional and national pact violations and their impact on the parliament and the cabinet.”

Aoun is the worst thing that happened to Lebanon.

Patriarch shouldn't get upset, channel the energy to positive action. Truth squad. I heard the Iranian foreign minister this morning saying that Iran is respected in the region because it respects the sovereignty of regional states. It is fighting for Assad, you see. Iran's conduct toward a Lebanon is respectful?? Call this guy out for what he is and what his. Outcry is.