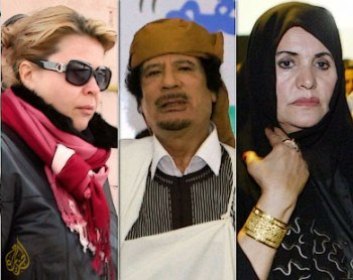 Moammar Gadhafi's youngest son, Khamis, has been killed in a clash with rebel fighters in southern Libya, Al-Arabiya television quoted the rebels as saying on Monday.

Meanwhile, Gadhafi's wife and three children fled to Algeria on Monday as rebels closed in on his hometown of Sirte and said the strongman still posed a danger to Libya and the world.

Gadhafi himself and two other children -- sons Saadi and Seif al-Islam -- were in the town of Bani Walid, south of the capital Tripoli, Italian news agency ANSA reported, citing "authoritative Libyan diplomatic sources".

Algiers announced that Gadhafi's wife Safiya, two sons and a daughter had crossed the border into Algeria.

"The wife of Moammar Gadhafi, Safiya, his daughter Aisha, and sons Hannibal and Mohammed, accompanied by their children, entered Algeria at 8:45 am (0745 GMT) through the Algeria-Libyan border," the foreign ministry said in a statement carried by the state APS news agency, giving no information on the whereabouts of Gadhafi himself.

So far Algeria has not recognized the rebels' administration and has adopted a stance of strict neutrality on the conflict in its neighbor, leading some among the rebels to accuse it of supporting the Gadhafi regime.

"We will ask Algeria to give them back," said Mohammed al-Allagy, who handles judicial affairs.

For its part, Italy's ANSA news agency said that Gadhafi’s son Khamis had "almost certainly" been killed as he tried to make the 100 kilometer journey from Tripoli to Bani Walid to join his father and brothers Saadi and Seif al-Islam.

The rebels had said previously that they had captured Seif al-Islam as they overran Tripoli but that claim was holed when he surfaced in the capital and met journalists.

Mohammed Gadhafi is the eldest son and the more discreet of the leader's offspring. An influential man in his father's regime, he was head of the Libyan Olympic Committee and also the chairman of Libya's General Post and Telecommunications Company.

Aisha was born seven years later, in 1977. Her style and blonde hair earned her the nickname of "Libya's Claudia Schiffer".

She runs a charity and has acted in various negotiations on her father's behalf.

Hannibal, who was born in 1978, is the family's bad boy. He single-handedly strained Libya's relations with Switzerland after causing chaos in a hotel and received a four-month sentence in France for beating his pregnant girlfriend.

Dubbed the "captain," Hannibal spent time in the military and was in charge of the National Shipping Company.

Also on Monday, Rebel chief Mustafa Abdul Jalil called for no let-up in international action against the embattled strongman.

"Gadhafi’s defiance of the coalition forces still poses a danger, not only for Libya but for the world. That is why we are calling for the coalition to continue its support," Abdul Jalil said at a meeting in Doha of chiefs of staff of countries taking part in military action in Libya.

The international coalition launched Operation Unified Protector on March 19 under a U.N. mandate which authorized air strikes to protect civilians.

Since March 31, the air strikes have been carried out under NATO command.

The coalition military chiefs said in a joint statement that the war in Libya "is yet to end" and that "there is a need to continue the joint action until the Libyan people achieve their goal by eliminating the remnants of Gadhafi."

U.S. Secretary of State Hillary Clinton is to visit Paris on Thursday for an international Contact Group meeting on Libya in a bid to boost financial and economic support for the rebels, the State Department said.

"Libya's transition to democracy is and should be Libyan-led, with close coordination and support between the (NTC) and its international partners," said spokeswoman Victoria Nuland.

"The United States stands with the Libyan people as they continue their journey toward genuine democracy," she added.

There has been speculation that Gadhafi was holed up among tribal supporters in his hometown Sirte, 360 kilometers east of Tripoli.

Rebels moved to within 30 kilometers of Sirte from the west and captured Bin Jawad 100 kilometers to the east, the rebel commander in Misrata, Mohammed al-Fortiya, told Agence France Presse on Sunday.

"We are negotiating with the tribes for Sirte's peaceful surrender," Fortiya said, adding only tribal leaders were involved, and that to his knowledge no direct contact had been made with Gadhafi.

General Suleyman Mahmoud, deputy commander in chief of the rebel forces, confirmed on Monday that talks were being held for a peaceful solution.

"There are still negotiations with elders and representatives of the city of Sirte. We are trying not to engage anyone in fighting except with those who are with the tyrant Gadhafi. But the outcome of the negotiations is still not clear," he told reporters in Tripoli.

The rebels have offered a $1.7 million dollar reward for Gadhafi’s capture, dead or alive.

Fierce fighting also raged in the west as rebels trying to wrest control of the region from Gadhafi’s forces said they were ambushed southwest of Zuwarah.

Some 70 percent of homes in central Tripoli still have no running water because of damage to the mains supply, but potable water is being distributed from mosques, giving priority to the elderly and medical facilities, NTC officials said.

Faysal Gargab, a member of the capital's stabilization team, said engineers who traveled to a "remote area" to connect wells back to the water grid were prevented from doing so by Gadhafi’s forces.

"The security of the area deteriorated ... The engineers had to flee because Gadhafi forces were disturbing the (sites)," he said without specifying when water would flow again or where the wells were located.

Rubbish trucks returned to work in the capital on Monday for the first time since it fell to the rebels.

HRW said it had inspected about 45 skeletons and two other bodies at the detention center in Tripoli's Salaheddine neighborhood.

"Sadly this is not the first gruesome report of what appears to be the summary execution of detainees in the final days of the Gadhafi government’s control of Tripoli," HRW's Middle East and North Africa director, Sarah Leah Whitson, said.