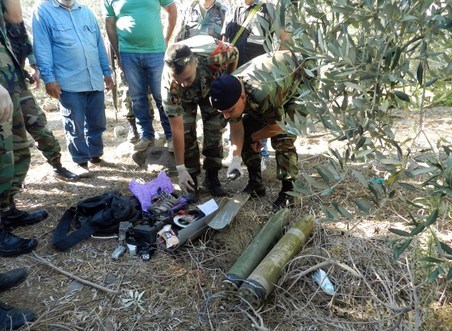 “The Lebanese Army has cordoned off the area,” NNA added.

It was not immediately clear if the platforms contained any rockets.

MTV said “ready-to-launch” rockets were discovered as Voice of Lebanon radio (93.3) said the launchpads did not have any rockets on them.

On Tuesday night, unknown assailants fired a rocket from the southern region of Rashaya al-Fakhar towards Israel but it fell short and landed in Lebanese territory, according to NNA.

No Israeli response was recorded, but flares were fired over the Kfarshouba Hills amid heavy overflights by surveillance drones.

Earlier on Tuesday, the Lebanese Army's Intelligence Directorate arrested two suspects for their involvement in firing rockets against Israel from the southern region of Tyre.

It identified in a statement the suspects as Palestinian brothers Khalil and Hassan Kharraz, saying they confessed to firing rockets on July 13 and 14.

As Safir newspaper said on Wednesday that they are residents of the al-Rashidiyeh refugee camp. They were found to be members of an Islamist Palestinian group, it added.

Informed sources told the daily however that they most likely acted on their own, without referring to the group and without political motives.

The sources said they believe several groups are behind the five rockets attacks which have targeted Israel from Lebanon since Friday.

The army also discovered a cache for rockets hidden in the suspects' pickup truck.

A Lebanese man had been arrested in connection with Friday's attack and he confessed that he fired a rocket towards Israel in solidarity with the Gaza Strip.

The rocket attacks from the South started amid an Israeli assault on Gaza, which entered Wednesday its tenth day, leaving at least 220 Palestinians dead and 1,550 others wounded.

They should congratulate them

strange how the law is applied in lebanon; khizbollah is allowed to send thousands of rockets to israel but any body else is not allowed.

Strange how you are always so concerned about a country that is not your own. Please focus on your racist genocidal state before commenting on the laws of others. K thanks