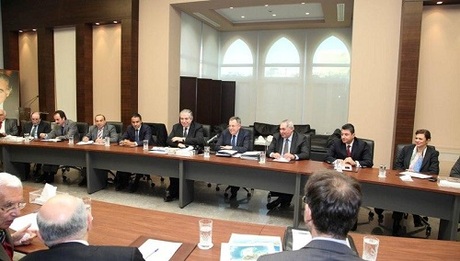 The March 14 alliance discussed the latest local developments in a meeting at the Center House to take a unified stance over the crises gripping the country's political life.

According to al-Mustaqbal newspaper published on Wednesday, the meeting which was held on Tuesday evening tackled in particular the possibility of attending a parliamentary session that includes on its agenda only urgent draft-laws.

The daily said that the attendees stressed that the only solution to the spending row is for the Finance Minister Ali Hassan Khalil to submit the state's 2014 budget draft-law to the parliament.

Recently, sharp differences loomed between AMAL movement and al-Mustaqbal over a spending decree that is threatening to delay the salaries of public employees.

Minister Khalil, who is Speaker Nabih Berri's adviser, expressed fear recently that civil servants would not be paid their salaries at the end of the month because of the paralysis of parliament.