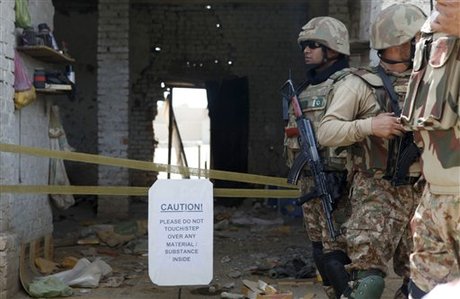 A U.S. drone strike on Wednesday killed least 18 people in a suspected militant compound in Pakistan's northwestern tribal belt, as the country's military wages a major offensive against insurgent hideouts.

The attack came in North Waziristan, where for the past month the Pakistani military has been fighting to wipe out longstanding bases of Taliban and other militants.

The official said there had been reports of militants moving to Zoi Saidgai from Miranshah and Mir Ali, the other main town in the area, after the start of the army operation.

Another security official said as many as 20 people may have been killed in the strike, 12 of them Uzbeks.

He said the attack took place around 2:00 am (2100 GMT) while an important meeting was going on in the compound.

In a statement issued to the media, the military claimed of killing 35 terrorists in separate incident of aerial strikes.

According to a statement issued by the prime minister's office, the premier was briefed about situation of the ongoing military offensive in the tribal area along with the Afghan border.

Sharif said the government would provide resources for the resettlement and rehabilitation of people displaced by the assault, the statement said.

Jets and artillery began hitting rebel targets on June 15 to try to regain full control of the district and ground forces moved in on June 30.

The offensive was launched after a dramatic attack on Karachi airport which killed dozens of people and marked the end of a faltering peace process with the Pakistani Taliban.

More than 400 militants and 25 soldiers have been killed so far, according to the military, though the area is off-limits to journalists, making it impossible to verify the number and identity the dead independently.

More than 800,000 people have been forced to flee from North Waziristan by the assault, with most ending up in the nearby town of Bannu.

There have been fears that many top militants also fled, including fighters from the feared Haqqani network, which is blamed for numerous bloody attacks in Afghanistan.