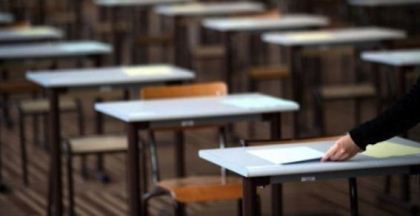 Grade 12 students held a sit-in on Wednesday at the Education Ministry in Beirut's UNESCO area to demand the correction of their official exams as the standoff between the Syndicate Coordination Committee and politicians threatens to sabotage their academic year.

“We refuse to allow anyone to correct our exams but our teachers,” the students said.

The angered students vowed that their sit-in will not be the last, warning that the next protest will be held outside the Grand Serail at the Riad al-Solh Square.

Head of Public Secondary School Education Teachers Association Hanna Gharib said during the students' protest that politicians failed to create divisions between the teachers and students and their parents.

“We will challenge the situation with the parents, teachers, students, employees and contract workers by our side,” he stressed.

Gharib warned that the SCC is ready to form the widest syndicate coalition to press the rights of public employees.

He blamed politicians for the “unfortunate situation” that the country, the students and the teachers are facing.

Bou Saab warned that a new school year is at risk.

Bou Saab considered that providing students with statements that they passed their official exams degrades the education in Lebanon.

“If this was the only solution then they should choose another education minister,” he said.

Too bad no one comment on such a crucial topic!

Everyone busy debating if Hezballah militia should be disarmed... better not say more