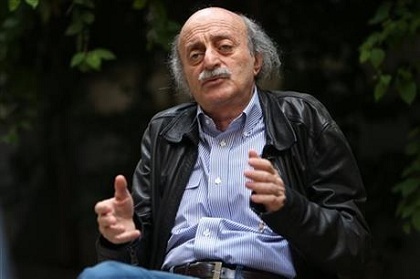 He said in a statement: “Local and regional developments have demonstrated that we need to commit to this nomination now more than ever.”

“The nomination may represent the only solution to end the presidential deadlock given the severe division in Lebanon,” he noted.

“The Democratic Gathering believes that Helou's nomination represents the line of moderation, consensus, and dialogue,” added the MP.

“It is supposed to help produce political solutions, especially in light of the ongoing Syrian war and the involvement of Lebanese powers in it,” Jumblat stressed.

He highlighted the need to adhere to the Baabda Declaration and Lebanon's policy of disassociation from regional conflicts.

Jumblat had told As Safir newspaper on Tuesday that he was ready to pull Helou's candidacy if the other candidates decided to do so in an attempt to resolve the country's presidential deadlock.

He remarked: “We should seek to safeguard the country by placing the nation's interest before any other.”

“This would materialize by speedy concessions made by everyone and through the election of a compromise president who is capable of managing the crisis,” he said.

“In this case, I don't mind to pull the candidacy of Helou if the others do the same to facilitate an agreement that would end the vacuum,” the PSP chief added.

Jumpy trying to be relevant again.

But something he said rings of a truth.

Yes, of course the problem is that the Christians cannot accomplish this even with a push from Patriarch and from the Pope in Rome himself, such is the obstinacy of the Aouni and their Aoun, and the severe dislike he has engendered among everyone else in the political spectrum. He has not laid the proper political groundwork to serve as a consensual choice, yet, he demands consensus and will not let the process go forward to find another consensus candidate, or for himself to serve as the majoritarian choice. He has chosen, instead, the one option that is completely dead.

Actually, they represent both, the sect and the country, otherwise, why specify a confessional identity to the particular office?
And if what you say is true, what Christian or what Druze or Shia enters into the discussion of which of the Sunni leaders becomes PM?? Its more the call of KSA than anyone in Lebanon.

And as for Berri, its a horse trade. Hezbollah gives Jezzine to Aoun and keeps Berri in his chair since Aoun is of more value to them than the chair of the Speaker. And again, what Christian Druze or Sunni enters into that calculation? Name me one.

On this you are right, and Geagea is ready to step aside. And Aoun?? is he ready or not? So the parity here is a false one. When it comes to a willingness to end the deadlock, Geagea understands his limitations and will concede to another candidate, either consensus or majoritarian. Aoun, though, has spent a political career in fighting everyone, and yet, demands to be the choice of everyone, and failing that, will not let the process go forward with his boycott of the Parliament.
So the Aoun choice is himself, on his terms, or else the collapse of Lebanese State institutions. It is a measure of the animosity this man engenders that the collapse of state institutions is not seen as the worse alternative to Aoun being at the head of them.

birds of a feather flock together
Joumblat and Helou equally worthless