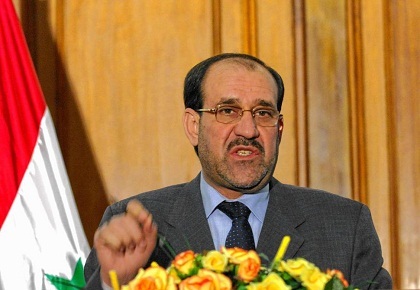 The removal of Prime Minister Nuri al-Maliki would be an "important part" of the solution to Iraq's political crisis, a spokesman for one of the country's top Shiite clerics said.

The statement is the first from any of Iraq's revered Shiite religious leaders to explicitly endorse Maliki's ouster, and is one of a string of recent announcements indicating a more active national role for the usually taciturn clergy.

The speedy formation of a new more inclusive government is seen as a crucial step in countering last month's onslaught by Islamic State (IS) militants, who have exploited resentment stoked by Iraq's ineffectual and fractious political leaders.

"This is the point of view of the marja al-Najafi," he told AFP on Monday, a "marja" being one of majority Shiite Iraq's four most senior Shiite religious leaders, known as the marjaiya.

The most senior of the marjaiya, Grand Ayatollah Ali al-Sistani, through a spokesman has already called for the "formation an effective government that is acceptable on a ... national level (and) avoids past mistakes".

The June 20 statement stopped short of calling for Maliki to step down, but was nonetheless an implicit rebuke for a leader seen by many as sectarian and divisive.

Maliki, who came to power in 2006, has vowed to seek a third term after his coalition dominated April elections, but Iraq's minority Sunni Arabs and ethnic Kurds -- and even some fellow Shiites -- have demanded his replacement.

Sistani had earlier issued a call to arms against IS insurgents, the marjaiya's first fatwa for jihad in Iraq for more than 90 years, despite decades of war and bloodshed.

"Now the marjaiya sees a real sustained danger for Iraq, and that Iraq could collapse within hours or days, and needs a stand from all its people to protect the unity of the country," Najafi said, speaking in the holy Shiite city of Najaf.

Iraq was almost torn apart in 2006 and 2007 when the bombing of the Al-Askari Shiite shrine north of Baghdad triggered a wave of sectarian slaughter between Shiite militias and Al-Qaida allied Sunni militants.

"The size and type of battle is different this time. The number of fighters is different. Daash is different from Al-Qaida," Najafi said, referring to the former Arabic acronym for Islamic State.

The marjaiya has in the past been more circumspect, and has stayed aloof from Iraq's graft-ridden and dysfunctional political arena.

"When there's a problem, it's up to the father to address this problem... the marjaiya is the father," he said.

"In any crisis, you will have the advice of the marjaiya. And that is for the stability of Iraq, its protection, its unity, and to reassure it and its neighbors and the region.

"With the crises, that we hope won't continue, it is expected there will be continued advice."

We agree for once FT. Strange my comment was deleted by naharnet.