Lebanese, Syrian Charged with Belonging to the Islamic State 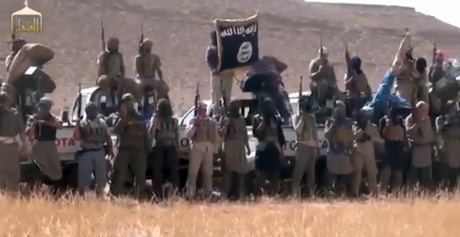 "Saqr charged a Lebanese and a Syrian with belonging to the Islamic State of Iraq and the Levant for the purpose of carrying out terrorist operations,” LBCI television reported.

LBCI remarked that the maximum punishment for such a crime is death penalty.

Saqr referred the case to the acting military magistrate, according to the same source.

Military Examining Magistrate Imad al-Zein issued last Thursday an arrest warrant against a soldier who had defected from the Syrian army on charges of belonging to the same terrorist group.

The Islamic State is the latest and most powerful incarnation of what began as an al-Qaida affiliate in Iraq.

The group is led by an ambitious Iraqi militant known by his nom de guerre of Abu Bakr al-Baghdadi with a $10 million U.S. bounty on his head. After taking the reins in 2010, al-Baghdadi successfully transformed what had been an umbrella organization focused mainly on Iraq into a transnational military force.

It also drew the ire of many opposition fighters in Syria by focusing not on the fight against Syrian President Bashar Assad, but rather on restoring a medieval Islamic state, or caliphate, in Iraq and Greater Syria, also known as the Levant.

The group is also referred to sometimes as the Islamic State of Iraq and Syria.

On June 29, IS declared the establishment of a "caliphate," referring to an Islamic system of rule that was abolished nearly 100 years ago.

Torture and hang them.

O if only HA would leave Syria these guys would never come to Lebanon noooooo in fact they would only come to vaca at our resorts.

Brits,us,israel,basyar assad alwaz kills women and children in the world.either u realize or not, they strt to kill muslims!long time a go!!They strt to kill innocent people long tume a a go!

lol, of course you love it, the posers in it did it specially for groupies like you.

hahahaha please just blow yourself up and spare us your idiocies

It is NOT ridiculous at all, Who wants a terror group such as IS in any country other than yourself. Don't you believe in peace and equality for all human beings. Or would you rather be ruled by dictators that run the affairs of every detail of your life. But with a name such as yours I guess you would rather bow down to someone like the self professed Baghdadi. We have a judge in Lebanon who doesn't want groups like this as well as do many Lebanese citizens.

and also T LOl His claim is NULL and VOID LMAO.. Surely he will have enemies who will want to collect this 10 million bounty.