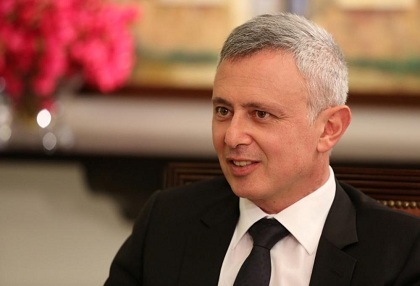 Bishop Samir Mazloum told the daily that the MP believes that the boycott is a constitutional right.

Mazloum made his remarks in light of a meeting on Wednesday between Franjieh and Maronite Patriarch Beshara al-Rahi.

“The lawmakers will head to parliament to elect a president when the conditions are ripe,” said Franjieh according to Mazloum.

“The conditions so far are not ripe yet,” he added.

The bishop also denied that al-Rahi had asked Franjieh to act as mediator with Free Patriotic Movement leader MP Michel Aoun to convince him to attend the elections or abandon his nomination.

Aoun has yet to announce his candidacy, but he has repeatedly stated that he is willing to run in the elections if there is consensus over his nomination.

Moreover, Mazloum stated that at the moment, Bkirki has no initiatives to hold a meeting between Aoun and his rival Lebanese Forces leader Samir Geagea.

“There are no new developments regarding the presidential elections. Local affairs are linked to a breakthrough in regional events,” he explained to al-Joumhouria.

Franjieh and al-Rahi had held a meeting on Wednesday during which they discussed the presidential elections and other pending issues.

Several elections sessions have been staged, but the majority of them were not held due to lack of quorum caused by a boycott by the Loyalty to the Resistance and Change and Reform blocs of the March 8 alliance.

The MPs defended the boycott by saying that they are awaiting for consensus to be reached over a presidential candidate.

"Bishop Samir Mazloum told the daily that the MP believes that the boycott is a constitutional right." Note the word "believes"...i believe i can fly too!

"“There are no new developments regarding the presidential elections. Local affairs are linked to a breakthrough in regional events,” he explained to al-Joumhouria." Is that because you and others, whether your allies or not, are funded by foreign countries to delay the election of a president?

What a joke! how humiliating it is to all of us (8 or 14 or in between) that we have to wait for other countries (from east or west) to make decisions for us!

A constitutional right to boycott the electoral session of Parliament? This is what he said?? And then when asked when should the Deputies engage the process of electing a president he says, "When the time is right".
Where in the Constitution does it state that the Deputies, who elect the President, may disband Parliament and return to elect "when the time is right"?
Anyone who can read print to paper can see that the Constitution mandates an electoral session during a specific period of time.

Article 73 of the Lebanese Constitution:
"One month at lease and two months at most before the expiration of the term of office of the President of the Republic, the Chamber is summoned by its President to elect the new President of the Republic. However, should it not be summoned for this purpose, the Chamber meets of its own accord on the tenth day preceding the expiration of the President's term of office.

Article 74 of the Lebanese Constitution:
"Should the Presidency become vacant through the death or resignation of the President or for any other cause (such as expiration of his mandate), the Chamber meets immediately and by virtue of the law elects a successor. If the Chamber happens to be dissolved at the time the vacancy occurs, the electoral bodies are convened without delay and, as soon as the elections have taken place, the Chamber meets by virtue of the law."

Article 75 of the Lebanese Constitution:
"The Chamber meeting to elect the President of the Republic is considered an electoral body and not a legislative assembly. It must proceed immediately, without discussion or any other act, to elect the Head of the State."

What do you call a warlord's son?
A failure.

It's great that yoou are getting thoughts from this post as well as from our discussion made here.

easy on Mr frangieh he didnt get a brevet he has no license except for the driving license which is handed with no exams like the brevet at that time.

Hi to every body, it's my first visit of this blog; this web site consists of amazing and genuinely excellent information in support of visitors.