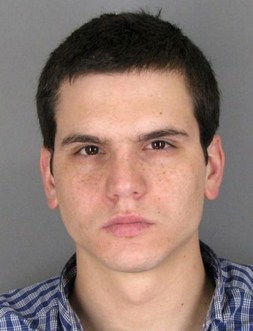 Bulgaria has identified on Friday Lebanese-French Mohammed Hassan al-Husseini as the bomber who blew up an airport bus in 2012, killing five Israeli tourists.

A joint report for the Bulgarian State Agency for National Security (DANS) and the prosecutor's office said in a statement that “the identity of the suicide bomber that carried out an attack at the Burgas Airport on the Black Sea coast was identified after DNA tests were run.”

The report said that the bomber “used a fake driving license under the name of Jacques Philippe Martin.”

Mohammed Hassan al-Husseini, 25, who holds the Lebanese and French citizenship is the real bomber.

"Friends and relatives of Husseini also posted messages of praise on social media for his martyr's death," the statement noted.

Two pictures of the suspect were published on the DANS's website on Friday and showed a serious-looking young man with fair skin, short dark hair and freckles.

He still has two accomplices of Lebanese origin, who are still at large.

Israel and Bulgaria have already accused Hizbullah of being behind the attack at Burgas airport on the Black Sea, the deadliest on Israelis abroad since 2004.

According to investigators, Hassan was the one who remotely detonated the bomb that was carried onto the airport bus by Husseini. Farah was believed to have assembled the explosive device.

But despite recovering fingerprints and DNA from the bomber, Bulgaria long struggled to identify the culprits.

Burgas prosecutor Kalina Chapkanova told national radio Friday that the investigation into the attack was ongoing and that several judicial requests had been made to different countries, although she did not say which ones.

Bulgaria has made so-far unanswered extradition requests to Lebanon.

The bomber died in the attack -- although it remains unclear if he intended to die -- and investigators had been unable to identify him despite having DNA from the severed head and limbs found at the site of the bombing.

There was never any doubt the terror party was involved in this criminal act. This news comes as no surprise to confirm their culture of terror and murder.

This is all fabricated ask mowaten/southern and co, they will tell u.. All takfiri/zionist/imperialist/neonazy/ksa...propaganda...
U should get well trusted sources; SANA, al manar...
Yalla chupachups all

nothing new here: we know these hizbushaitan are iranian terrorists....

This is a perfect argument, i think the west invensted this, like the zionist takfiri west assassinated hariri, hawi, assir....to make us mad from syrian, tried to assassinate hmadeh, el mur, boutros harb.... For same reason... Came in front of iranian embassi and killed hachem salman to make iran look bad...
Bravo flame ur defuction is really great, u should be working for russia todat or SANA, no wait u alreaddy do...
Go have some chupachups man

Waw that's all u hv found to answer..
Anyway it is better than SANA propaganda, bravo u r making progress, so now go hv some chupachups....

Let's look at what happened: a bus carrying Israeli tourists was blown up. That is a fact. So the first direction everyone should point at is Hezbollah. What is their motive? Well, to kill Israelis without shooting rockets at Israel. A lot of Lebanese go to Bulgaria, I myself went to Varna two years ago. If a lot of Lebanese can go to Bulgaria, why can't a Hezbollah operative go there? Witnesses said the guy had an Arab accent. Why would they lie? They were just the targets of an attack. Take the flip-side, and say Mossad did it. What is their motive? To kill their a few of their citizens in another country just to frame Hezbollah? Doesn't make sense.

Assuming they want to frame HA, this happened 2 years ago. Wouldn't Israel have reacted by now?

In the end, people see what they want to see. And flamethrower and his cohort, as usual, will spew the tired takfiri/zionist and imperialist conspiracy crap. Can't believe that these neanderthals are still living in the 21st century.

Hey Southern I'm going according to witness reports. You wanna put them on the stand that's between you and them. I don't know when/if he spoke before he blew up the bus. And so what if he has French nationality. Most Lebanese have multiple nationalities. It's like you're arguing that a Hezbollah member can't have another nationality.

Qabalan: an Israeli agent could have opened fire at a Lebanese Army Helicopter, killing its captain... CNA quoted Hizbullah sources as saying the group knows nothing about the shooting... sources said Hizbullah feared the incident might be aimed at creating rifts between the army and the resistance... Al Manar reported that a helicopter came under gunfire from "unidentified" gunmen.

Unlucky for Hezballah, Cpt Hanna's co-pilot was not murdered like he was and reported what really happened and the terrorists had to fess up.
............
Hezballah denied they knew anything about a Sami Hani Chhab head of their Egyptian terrorist cell until the Egyptians released his real name Mohammad Yousef Mansour, Nasrallah had to fess up.
...............
Hezballad denied they had anything to do with the terrorist bombing in Bulgaria; Bulgaria identified on Friday Lebanese-French Mohammed Hassan al-Husseini as the bomber who blew up an airport bus in 2012... to be continued.

Thank you but even if u put it to their face they will still deny all..
And they go accusing the others of being fanatics...
Chupachups for all march, all the moumani3in... All the hypocrits

southern, when KSA gives a 3 billion USD donation for the LAF, you say it came with conditions to make the LAF subservient to KSA. Now you admit that Iran gives HA all its arms, what conditions you think Iran attaches to these weapons?

FT you ave posted some really stupid statements , but this clearly highlights your stupidity

Southern : you're wrong. HA owes its existence to the acceptance of the lebanese people .

Should it be determined democratically that the people are opposed to Hezbollah weapons. Hezbollah has no choice but to disarm or face a civil war. And this will be determined.

HA has shown its true face and cannot afford an election because it will lose everything ! Why do they do mistake like creating the "Free Sunni Brigade" to attack christian churches ? Because all their actions are based on lies to endocrinate you and your peers ! You live in an illusion !