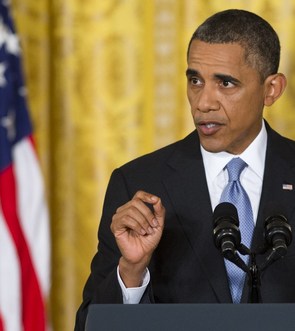 Obama said that while the U.S. supports Israel's right to defend itself, "the United States and our friends and allies are deeply concerned about the risks of further escalation and the loss of more innocent life."

Israeli troops launched an offensive on the Gaza periphery aimed at destroying Hamas' network of cross-border tunnels on the 11th day of an assault in which 274 Palestinians, including many children, have been killed.

"Although we support military efforts by the Israelis to make sure that rockets are not being fired into their territory, we also have said that our understanding is the current military ground operations are designed to deal with the tunnels," Obama told reporters.

The U.S. commander-in-chief added that Washington was "hopeful that Israel will continue to approach this process in a way that minimizes civilian casualties."

At least 1,920 Palestinians have also been wounded since the launch of the assault.

Since the Israeli operation began, more than 1,207 rockets fired from Gaza have struck Israel, and another 333 have been shot down by the country's Iron Dome air defense system, Israeli army figures show.

"All of us are working hard to return to the ceasefire that was reached in November of 2012," Obama said.

He added that Secretary of State John Kerry "is working to support Egypt's initiative to pursue that outcome. I told Prime Minister Netanyahu that John is prepared to travel to the region following additional consultations."

Later on Friday, the European Union said it was "very concerned" over the escalation and reiterated a call for an immediate ceasefire.

"We are very concerned about the escalation in the Gaza Strip including the resumption of rocket fire into Israel and the Israeli ground operation," said a testaments issued on behalf of the 28-nation bloc.

Welcoming the humanitarian pause agreed on Thursday, EU nations regretted it was not followed by a lasting ceasefire, and said:

"We call on all parties to immediately agree to a ceasefire. We underline the obligation to allow full and unimpeded access for humanitarian assistance."

Deploring the many civilians deaths, including numerous children, the EU nations said that "we strongly deplore such incidents and we call for them to be investigated swiftly."

The statement condemned Hamas for firing rockets into Israel but said that while "Israel has the right to protect its population... it must act proportionately."

"We reiterate our call on both sides to de-escalate the situation, to end the violence and to end the suffering of the civilian populations."