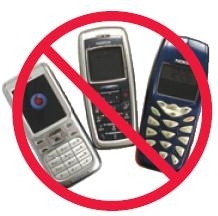 Honduras President Porfirio Lobo has had it with his Cabinet ministers' cellphones.

Lobo calls it "a lack of courtesy" that the phones are ringing and beeping during the weekly two-hour Cabinet meeting. So he is banning cellphones from the meeting rooms at the presidential residence starting next week.

The irritated president proclaimed the ban during a Cabinet meeting Tuesday that was transmitted by a state-run television channel.

It wasn't the first time cellphones and other noisemakers have grated on Lobo. He lectured his ministers in January over the excessive use of cellphones. And in May, he scolded them for using sirens to get through the congested streets of the Central American country's capital.

wow we need him to come to lebanon for a stint