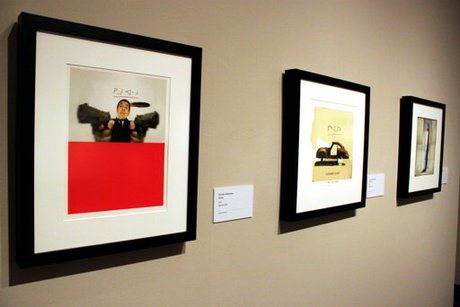 A young Native American boy named Chii stares straight into the camera of Vicki Monks. His long, dark hair is tussled by the breeze as she captures his solemn expression while he waits for his family on the edge of a Yuchi burial ground in Oklahoma.

Monks is telling a story of sorts with Chii's photograph — a story about mixed American Indian ancestry.

An age-old tradition among indigenous people throughout the world, the art of storytelling has transcended words for Monks and the other Native American artists who are part of the "New Native Photography, 2011" exhibition at the New Mexico Museum of Art.

Through a collection of seemingly simple and other more complex photographs, the artists are working to convey their perspective on everything from ancestry and environmental concerns to stereotypes and tribal sovereignty.

"I think photography is an important element in storytelling," Monks told The Associated Press in a telephone interview. "You can convey a lot of deeper meaning with photography and that adds to the body of storytelling."

For Monks, a Chickasaw who grew up with the Cherokees in Tahlequah, Okla., portraits of Native Americans of mixed tribal heritage has become a fascination. In the past, many tribes looked quite distinct from one another, she said.

She could see it all blended together in Chii.

Monks is one of 19 artists from various tribes, nations and pueblos across the United States featured in the exhibition, which stems from a collaboration between the museum and the Southwestern Association of Indian Arts for its annual Indian Market.

While the photographs in the exhibit are new, photographers have documented Native American life for more than a century. Studios started popping up in western outposts in the mid-1800s, and photographers such as Edward S. Curtis set out to document traditional Indian life before it was forever altered by westward expansion.

In the early 20th century, several Native American photographers also began to emerge, said Hulleah J. Tsinhnahjinnie, director of the C.N. Gorman Museum at UC-Davis and one of the curators for the exhibition.

"Natives and photography is nothing new," she said. "To everyone else, it's a novelty if you have no idea it's out there."

Today, there's plenty out there, with networks of Native American artists sharing their images through Facebook, Flickr and other social media websites.

As for the photographs in the exhibition, what's new is the style. Everything from layered digital images to collages and glitter are used to get the message across.

In one case, the late Kimowan Metchewais mixes photographic elements of an old junked automobile with the text of a traditional Cree language to create an image titled "War Pony 2010."

Da-ka-xeen Mehner's photographs explore the effects of people on the Alaskan environment. His images of the Alaskan oil pipeline and a rock outcropping scrawled with graffiti are framed by close-ups of otter fur, caribou skin and glacial ice.

The largest photographs in the exhibition come from Tiffiney Yazzie, a recent graduate of Arizona State University. She said the portraits of her mother serve as an exploration of the bond the two have as well the matriarchal element that runs through many Native American tribes.

Tsinhnahjinnie said understanding the meanings behind some of the photographs might be difficult for someone who doesn't know much about Native American life. But she said the exhibition offers an opportunity to learn more, even for tribal members from different parts of the country.

Her advice for those expecting stereotypical images of Native Americans: "You need to have an open mind, and you need to leave your cowboy hat at the door."

In the way storytelling has carried traditions for many tribes, Tsinhnahjinnie said the photographs in the exhibition have the power to leave a visual legacy.

For Mehner, photography is a universal language that doesn't always require an understanding of specific cultural norms.

"Talking broadly about the world, I think photography is the language of our society," he said. "Image making is more common and we're bombarded with imagery every day. It's everywhere. It's become the natural language for storytelling."