Syrian Security Forces Carry Out Raids in Homs and Hama 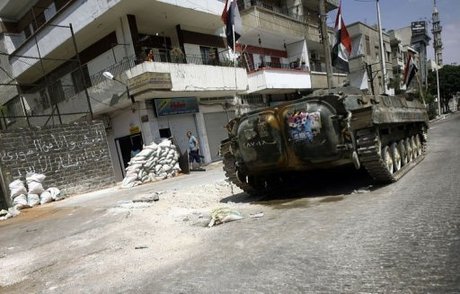 The troops backed by tanks and military vehicles entered districts in Homs and Hama as part of efforts to crush five months of street protests against President Bashar Assad.

Wednesday's raids come a day after security forces killed seven people as thousands of protesters poured out of mosques and marched through cemeteries at the start of Eid al-Fitr, a holiday when Muslims traditionally visit graves and pray for the dead.

The three-day holiday, which started on Tuesday, marks the end of the holy month of Ramadan.

The Local Coordination Committees activist network said security forces set on fire the homes of two activists in Houla, in the Homs province. They also threatened their families with arrest if the activists fail to turn themselves in, it said.

The London-based Syrian Observatory for Human Rights said the at least 16 people were arrested in Houla Wednesday.

The activists said the military also carried out raids in districts in Hama. The military withdrew from Hama earlier this month following a weeklong military siege and military operations in the city, a hotbed of dissent against the regime.

Human rights groups said more than 2,000 civilians have been killed in the crackdown on the protest movement that erupted in mid-March.

Amnesty International said it believed that at least 88 people, 10 of them children, have died in detention in Syria during the past five months.

Some of the victims were as young as 13, it said Tuesday. It said that in recent years the annual number of deaths behind Syrian bars has been about five.

"These deaths behind bars are reaching massive proportions, and appear to be an extension of the same brutal disdain for life that we are seeing daily on the streets of Syria," said Neil Sammonds, Amnesty International's researcher on Syria.

In Washington, the Obama administration announced Tuesday a new set of sanctions on Syria. The regulations ban Americans from doing business with Assad's foreign minister and two other senior officials. The Treasury Department's action Tuesday also blocks any assets the Syrian officials may have in the United States.

The United States already had imposed sanctions on more than 30 Syrian officials — including Assad — and firms, and banned any U.S. import of Syrian oil or petroleum products.