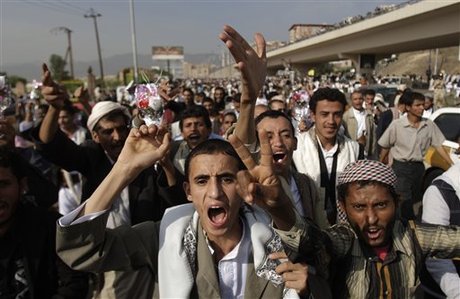 Ailing Yemeni President Ali Abdullah Saleh accused his opponents of being corrupt and arms dealers who are exploiting youthful protesters demanding his ouster, in a televised address.

"Those who went to the University Square to support the youth revolution that demands the ouster of the regime ... have fed on corruption, and are dealers of arms and land," Saleh said in the address aired late Tuesday on state television as he received well-wishers at his residence in Riyadh.

The veteran leader has been in the Saudi capital since early June for treatment after he was wounded in a bomb attack on his Sanaa compound.

"Our people know them well. They were a burden on the political system which was always blamed for protecting those corrupt ... who are now (demonstrating) at the University Square," Sanaa's epicenter for anti-regime demonstrations, he said.

"Let them go away ... corrupt, liars and deceivers. We do not mention names, but our people know them very well," he added, in an apparent reference to the leaders of the opposition and tribal chiefs who have backed protests that began late January calling on him to quit after 32 years in office.

Saleh wore gloves and a headgear, just as he did in all his appearances after the attack, which could be covering unhealed wounds or scars. He refrained from the customary handshakes with visitors.

In an earlier address on Tuesday on the occasion of the Muslim Eid al-Fitr feast, which marks the end of the fasting month, Saleh called for a mechanism to implement a Gulf plan aimed at a peaceful transition of power.

He told his ruling General People's Congress party to "make contact with the (opposition) Common Forum to develop a mechanism for implementing the Gulf plan without delay," Saba state news agency reported.

The Gulf plan proposes that Saleh would transfer power to the vice president within 30 days in exchange for a promise of immunity from prosecution.

Saleh vowed earlier in August to return "soon" to his impoverished country.