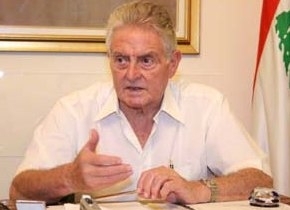 “Aoun is one of the conspirators against the Christians' existence in Lebanon and the orient as his actions harm the interests of Christians,” Chamoun said in comments published in the Kuwaiti al-Anbaa newspaper.

He slammed the endeavors of the FPM leader as “more dangerous than the practices of the Islamic State of the Iraq and the Levant against Christians in Iraq.”

“Aoun is obstructing the presidential poll and hindering the Christians' top state post, compelling settlements that will not bring a strong head of state to power,” Chamoun told the newspaper.

He accused the FPM chief of having similar goals as Hizbullah, pointing out that Aoun aims at the formation of a constituent assembly to reshape the political life in the country.

Hizbullah chief Sayyed Hassan Nasrallah had continuously called the establishment of a constituent assembly elected by the people.

Chamoun voiced doubts that the presidential elections would be held anytime soon.

The parliament convened nine times to try to elect a successor to Suleiman but failed during the last eight sessions due to a lack of quorum.

Turning to the issue of parliamentary elections, Chamoun rejected attempts to extend the tenure of the current parliament, expressing fear over further vacuum at state authorities.

However, he described the postponement of parliament's term as a “necessary evil,” warning that “staging the elections would compel the cabinet to resign, which means vacuum will hit the executive authority due to the vacancy at presidency.”

Lebanon will enter on August 20 a deadline to agree on a new electoral law ahead of the November elections.

Finally, someone speaking the truth. Dory, one of the few remaining bastion of Lebanese politicians we can be proud of. Why not make him the President?

Don't be angry. He is just saying what every free thinking Lebanese is thinking that's all. Don't shoot the messenger.

Are tous praline about Logic? If course your logic is to follow Aoun blindly comme les moutons de Panurge even though Aoun has no logic but to bend to Hizbollah in return for their coverup and support in order for Aoun to obtain a Christian imarat in Lebanon.
No other logic whatsoever for Aoun. He was against the Syrians he is with the Syrians. He was for a secular state he is the champion of confessionalism. Once he is for majority rule and once he is for consensual rule.

I think you will agree that the key here is for MPs to come to parliament and VOTE.

are you shia or secular?

Just an observation: why in this country we focus on our religion differences and we ignore our common interest ?don't we realize that social security,employments ,equal rights, education,healthcare, wellbeing , national pride are our common goals?don't we realize that by focussing on our religion differences, we will be fragmented and our common goals will never be achieved? don't we realize that since the independence of this country most leaders were and are crisis managers who can only survive in crisis situation? subsequently the country is in a continuous crisis and becomes an easy prey for regional powers? and it is a fact that most of us abroad , get fair opportunities and become more successful than at home !

Cha mount would be a good compromise president, come to think of it. And he has spoken the truth here.

“Aoun is one of the conspirators against the Christians' existence in Lebanon . I say he is the only conspirator!

General = Orient christians
how can someone conspire on himself?

lebanon will be strong through General the one n only he is the leader who stopped the conspiracies !!!!!! who made the change in lebanon after decades of conspiracies done by all of you you sold our lands n mankind but you will never steal our SOULLLL !!!!!!!!!!

what happens to the Christians and to the 'balad' when he dies..... food for thought;)

Lol x 2
Sophia please let go of your false hopes for this sick old man. Everyone is working on a consensual name and when agreed it will be HA and berry who will break the news to aoun. Alas he doesn't appear to be loosening his grip but when he does you will see for yourself ( if it hasn't hit you already) just what a self interested in Christian aoun really is. All these years he has disgraced himself supporting HA and they will leave him holding his old fella out in the cold. Then we will see the aouniye's true disassociation policy in work.

Sorry, but on what planet do you live?

Ft you are right kind of like appointing an incompetent TV CEO to run a station just because he is related.

for once i agree with mr.Chamoun.... Aoun is the american conspiracy since 1988 infused like a virus against the christian militia LF then...
he was planted to divide and weaken the christians... he was promised the presidency in that order so he was offered instead exile!

bint jbeil, you are sooooo right
The tragedy is that the young Christian Lebanese don't know their history before 1975, and follow these clowns

MF (My Friend) flamethrower; please do not worry about those who get your posts deliberately removed... just keep posting and posting and posting. They will never be able to silence you... you are the beacon of freedom and unbiased reporting. Allah Yihmeek Ya Rabb

You are an arrogant misinformed propagandist. The quorum claimed by Berri is two thirds of 128 Mps. Explain to me how M14 and Jumblatt command 85 MPs.

he is a known troll

you just confirmed beyond a shadow of a doubt you are clueless!!!

Most of you people are idiots. When have inflammatory statements, even those based in reality, ever produced a desired outcome? Never. You as a people, as a nation, are pathetically absurd, grow up and face the truth. Quit serving foreign masters and face the "facts' on the ground in Lebanon. You are worthless as a nation until you face reality.,

"well respected"? Excuse me? You mean an imperialist stooge of the worst kind