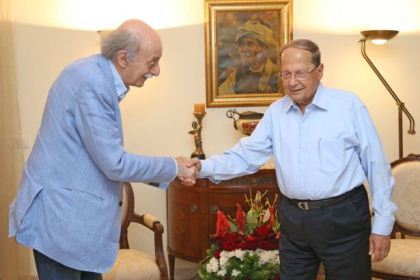 Jumblat left Rabieh without addressing reporters but the two parties later issued a joint statement describing their meeting as “frank and friendly.”

The talks “focused on several issues, mainly Lebanon's battle with terrorism,” it said.

Aoun and Jumblat “stressed unconditional and absolute support to the Lebanese army,” and discussed ways to confront the growing challenges, including the activation of constitutional institutions and the speedy election of a president.

The two lawmakers, who head parliamentary blocs, also discussed the importance of keeping contacts between the PSP and the FPM to bring the Lebanese closer, the statement said.

Jumblat's meeting with Aoun came amid a report that Hizbullah Secretary-General Sayyed Hassan Nasrallah advised the PSP chief to hold talks with the lawmaker.

“We have a president … He is Aoun and we continue to back him,” As Safir daily quoted Nasrallah as telling Jumblat, a centrist.

“You shouldn't talk only to me. Go see Aoun and agree with him,” the Hizbullah chief reportedly said.

Lebanon has been without a president since May 25 when Michel Suleiman's six-year term ended amid a failure by parliament to elect a successor over differences on a compromise candidate.

The March 14 alliance has backed the candidacy of Lebanese Forces chief Samir Geagea. But the Hizbullah-led March 8 camp has not officially announced its support for Aoun, who has claimed that he would run for the presidency only if there was consensus on him.

if he got balls (which we all know he doesn't) let him stand in front of parliament, announce his candidacy, and let democracy (or what we have left of it) play its role.

no, they are men of free will fully capable of leading armed forces in a brutal civil war; they will do no such thing as listening to a terrorist who tells them to talk to his /one of his soulmates terroristos

Seriously Lebanon is looking more and more like Circus and here are 2 x of most eloquent clowns right here ;)

Of course Jumblatt did what Nasrallah told him. It's like Al Capone said, "you can get further with a kind word and a gun than you can with just a kind word." Jumbo wasn't leaving the dungeons of Dahye without ensuring Nasrallah he'd talk to Aoun.

It's not a big deal, his popular base knows its enemies, they standed against shitte milicias in 7ayyar despite jumby official calls for laying down weappons.. (even arslan guys did so; hence no doha for arslan..) they are having yearly commemorations sinces... Jumblat can try all diplomatic ways, the people knows who are the friends and who are the enemies...

As Lebanese we pride ourselves by having the most educated and brightest minds achieving highly in variety of fields and contributing to humanity disproportionally to our numbers. Yet look at our leaders, how embarrassing to have such scum and low life individuals controlling all of us.

some things come back and bite you in the a.., propaganda propaganda propaganda on their news channel and suddenly the citizens see the army as the best savior
the best thing about the new deal -mourashah tawefoki- means that inshalla by the next presidential elections cukoo will be gone

why do all the masons support the aoun axis?