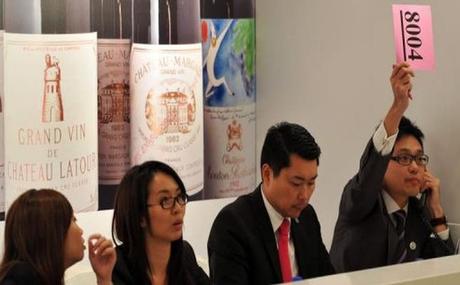 A 300-bottle collection of Chateau Lafite Rothschild has sold for almost $540,000 in Hong Kong, setting a world record price for a single wine lot auctioned this year, organizers said.

The collection spanning 1981 to 2005 was knocked down for HK$4.2 million ($539,250) at Christie's two-day Autumn wine sale, which is expected to rake in over $5 million in sales, the auction giant said late Saturday.

The record price, below a HK$4.5 million pre-sale estimate, was "the highest value lot achieved at any wine auction worldwide this year," Christie's said.

Prices for Chateau Lafite Rothschild have reportedly soared as much as twelve-fold over the past decade as the prestigious brand -- and other labels from Bordeaux -- lure in wealthy Chinese buyers.

The sale, which wraps up Sunday, comes after auctioneer Acker Merrall & Condit said its May sale grabbed multiple world records, including a price of almost $107,000 each for two cases of 1988 DRC Romanee-Conti.

Hong Kong has emerged as the world's third-largest auction hub after New York and London, thanks in large part to China's rapidly growing number of millionaires.

Mainland Chinese are regular buyers of the top lots at sales of art, jewelry and wine, and Hong Kong has positioned itself as a wine hub for Asia as well as the gateway to China's vast market.