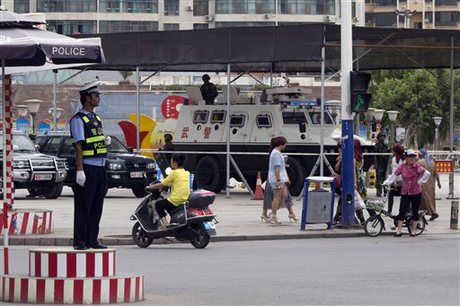 China has detained a man on suspicion of making up rumors that the Chinese military had killed thousands of people in Xinjiang, home to the mainly Muslim Uighur minority, state media said Monday.

The 22-year-old Uighur uploaded an article onto overseas websites about the alleged killings in Shache county, or Yarkand in the Uighur language, the Xinjiang government web portal Tianshan reported.

Beijing has blamed a series of recent violent attacks on separatists from Xinjiang. Rights groups accuse China's government of cultural and religious repression which they say fuels unrest in the region bordering Central Asia.

A total of 37 civilians and 59 "terrorists" were killed in an attack on a police station and government offices on July 28 in Yarkand, according to earlier reports by the official Xinhua news agency.

On those figures, it would already be the bloodiest incident in the restive region since rioting involving Uighurs and members of China's Han majority left around 200 people dead in the regional capital Urumqi in 2009.

But the July violence has been the subject of claims and counter-claims by Beijing and campaign groups, with an exiled Uighur leader at one point reportedly alleging a toll in the thousands.

Access to information in Xinjiang is strictly controlled by the authorities and reports can often not be independently verified.

According to the exile World Uyghur Congress (WUC), it received a letter from an eyewitness to the incident but had been unable to confirm its contents.

In one village, it said, "a fully armed special Chinese army unit" invaded a household where 45 women had gathered to celebrate the end of Ramadan, and "shot everyone inside including small children who were present".

"Everyone who was there was killed on the spot," it said.

One location "was bombarded heavily, after that armed forces went in and killed off those who were still alive, some wounded were strangled and their head were cut off," read the text sent by WUC.

"Among them there were newly born toddlers, old ladies and breast-feeding mothers," it added.

"Even as I write this there are armed Chinese forces with pointed automatic guns, may Allah give us a refuge!  "

Some of the text in the WUC release matched the wording given in the Tianshan report on the detention of the 22-year-old, who lives in Urumqi and whose name was only given in phonetic Chinese.

His message had been "detected and used by hostile overseas forces including the World Uyghur Congress" and "caused vicious impact", it added.

Police found hundreds of text, audio and video files of "violent terrorist" materials in his laptop, the report said, adding he was "capable of making explosive devices".

He had confessed to fabricating and spreading the massacre rumors, it said.

State media reported at the weekend that 18 other suspects had "surrendered" to police investigating the Yarkand incident.

Attacks related to Xinjiang have grown in scale and sophistication over the last year and have spread outside the restive region. A fiery crash at Tiananmen Square, Beijing's symbolic heart, in October, killed two tourists and the three people in the vehicle, all from the same family.

China launched a national campaign against "rumors" last September, with Internet users facing three years in prison for writing defamatory messages that are re-posted 500 times or viewed more than 5,000 times.