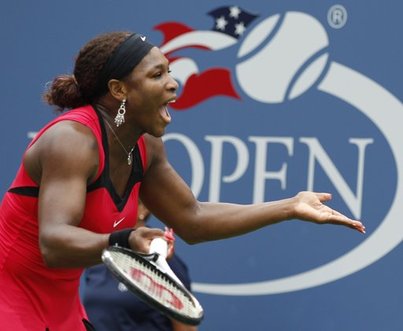 There's the Serena Williams style, filled with intimidation and huge shots. And there's the way Caroline Wozniacki does it, with great hustle and even better conditioning.

Both players made it through the fourth round of the U.S. Open on Monday and stayed on a path that could collide in the semifinals — Williams with a big-serving 6-3, 6-4 victory over No. 16 Ana Ivanovic and Wozniacki with a 6-7 (6), 7-5, 6-1 win over No. 15 Svetlana Kuznetsova that took 3 hours, 2 minutes.

The 28th-seeded Williams is the only one of the eight women left in the draw who has won a Grand Slam title, which could answer the question of whose style works better in the sport's biggest events.

But Wozniacki is top-seeded at the U.S. Open and No. 1 in the rankings — tops in a system that rewards consistency more than big moments. By that standard, it is, indeed, hard to find anyone better.

Knowing that, as well, Kuznetsova pressed throughout and took a 4-1 lead in the second set. But that's when the party ended for the two-time major champion. She lost 12 of the next 14 games and finished the night with 78 unforced errors on a windy night in Arthur Ashe Stadium.

"She was a wall," Kuznetsova said. "To break a wall, you cannot hit hard all the time. You have to mix it up. I think I did the right things. I just couldn't close it up in the right moments."

Williams had to tone things down a bit for her match, played hours earlier, but also in blustery conditions.

Still, there were two moments that stood out: A key point she won after letting a 3-0 lead slip in the first set, after which she clenched her fist and screamed, "Come On"; and the way she closed out the match, with four straight serves Ivanovic couldn't return, maxing out at 111 mph.

Not surprisingly, the discussion afterward was whether Williams tries to be intimidating on the court.

Roger Federer can be pretty intimidating, as well.

Forced to wait until 11:51 p.m. to start his match, he came out like a man in a hurry, putting away the first set against Juan Monaco in 18 minutes en route to a 6-1, 6-2, 6-0 victory. In the second game of the second set, he served four straight aces — a perfect game, of sorts.

"It's only a game. Only four points," he said. "But it's nice to do it that way instead of having to take 10 minutes."

Just as impressive was the quick way Federer closed out the match, with a light mist falling, the court slickening ever so slightly and the unsavory prospect of having to sit through a rain delay at 1 in the morning. He only lost 12 points in the third set.

"There was not much margin for us, because it was so late," Federer said. "Probably one rain delay and they'd have sent everybody home."

Federer hasn't missed a Grand Slam quarterfinal since the 2004 French Open and his quarterfinal here will be against No. 11 Jo-Wilfried Tsonga, who overcame a two-set deficit against Federer in the Wimbledon quarterfinals for the victory. Tsonga beat eighth-seeded American Mardy Fish, 6-4, 6-7 (5), 3-6, 6-4, 6-2.

"Doesn't necessarily need to be the next Grand Slam, but it's sure something I'm looking forward to," Federer said of the rematch. "I live for the big matches, live for playing a guy who is explosive, has got some firepower. I like to play those kind of players, especially now that we're in the deeper stages of the tournament."

Also winning in straight sets Monday, though nowhere near as quickly, was No. 1 Novak Djokovic. Djokovic held off four set points in the first-set tiebreaker en route to a 7-6 (14), 6-4, 6-2 victory over No. 22 Alexandr Dolgopolov.

Djokovic improved to 61-2 on the season and his opponent, a highly regarded 22-year-old from Ukraine, knew what his odds were even before the long tiebreaker.

"No, I don't think the tiebreak would change the match even if I'd won it," Dolgopolov said. "I mean, he's better than me physically now."

Djokovic's quarterfinal will be against his Serbian Davis Cup teammate, No. 20 Janko Tipsarevic, who defeated 2003 French Open champion Juan Carlos Ferrero 7-5, 6-7 (3), 7-5, 6-2. The Serbs practice together a lot, which might give Tipsarevic the advantage of some familiarity.

"But those things are maybe 2 percent of the overall outcome of the match," Tipsarevic said. "You know, who plays better tennis is going to win. It's as simple as that."

Also earning spots in the women's quarterfinals were No. 10 Andrea Petkovic, who faces Wozniacki next, and No. 17 Anastasia Pavlyuchenkova, whose next match is against Williams.

Pavlyuchenkova defeated No. 7 Francesca Schiavone, 5-7, 6-3, 6-4 in a match that featured 16 service breaks in 31 games. She knows Williams probably won't be contributing to that kind of number in the quarterfinals.

"I don't want to go out there and enjoy just being on the center court playing against Serena," Pavlyuchenkova said. "I would like to do well, try to fight, and with my effort I try to beat her. But of course I respect her a lot, as well. She's just great."