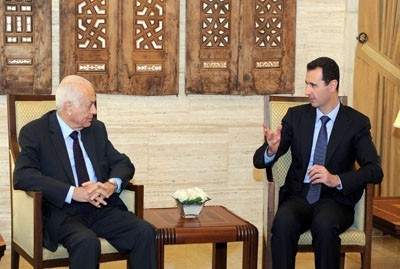 A planned visit to Damascus Wednesday by Arab League chief Nabil al-Arabi in which he had been due to press the bloc's calls for reform has been postponed, diplomatic sources said.

"The visit has been put off to an undetermined date at Syria's request and a new meeting will be arranged soon," one diplomatic source told Agence France Presse on Tuesday.

Meanwhile, Syria’s state-run television said “Syria has asked the Arab League’s secretary-general to postpone his visit to Damascus for objective reasons of which he has been informed.”

Arabi was scheduled to propose during his visit to Damascus that Syrian President Bashar al-Assad hold elections in three years and immediately halt a crackdown on dissent, according to a copy of the proposals seen by Agence France Presse.

Arabi, who had been tasked by Arab foreign ministers with relaying the 13-point document, was also supposed to ask Assad to free political prisoners and compensate those wounded in more than five months of almost daily anti-regime protests.

The proposal, agreed at an Arab foreign ministers' meeting last month in Cairo, calls for a "clear declaration of principles by President Bashar al-Assad specifying commitment to reforms he made in past speeches."

It said Assad should declare his "commitment to making the transition towards a pluralistic government and use his powers to speed up reforms and announce multi-candidate elections ... for 2014, when his mandate ends."

It also demands an immediate halt to the Syrian government's crackdown on anti-regime protests.

At the August 27 meeting, the Arab ministers had called for an end the bloodshed "before it is too late" and for "respecting the right of the Syrian people to live in security and respecting their legitimate aspirations for political and social reforms."

More than 2,200 people have been killed in Syria since the almost daily mass protests began, according to the United Nations. Assad's regime says it is fighting foreign-backed "armed terrorist gangs."

The proposal also calls on Assad's minority Alawite-led government "to immediately end" the crackdown on protesters in order "to spare Syria from sliding into sectarian strife or providing justification for foreign intervention."

The initiative also calls on Assad to "separate the military from political and civil life" and for the start of "serious political contacts between the president and representatives of the Syrian opposition."

Trusting a monster and a brutal killer to implement reforms is the height of this so called Arab Leaugue's ignorance .

All of this is too little too late and will only be read by the Criminal Assad regime as yet another extended "fllexible" deadline and as a green light for continuing his genocide against his people. This is meant to postpone or delay indefinitely any outside intervention to stop Assad in his tracks from further murder (which is the most effective way of dealing with the likes of this criminal regime who has pulled all moral and any other stops to pursue its on going genocide against its people). I guess the Free Syrian people will remember the "arab League's initiative' for a long time after the fall of their bloody Tyrant.

What a crap plan. Lets crush Assad by sending the resistance over there to free the Syrian people from that tyrant.

Alawite-led government? What? The cabinet is mostly Sunni, and the PM is Christian. That makes it Christian-led and Sunni-dominated.

Shousayer 3alaykom? 2014 ? how many more Syrians have to die and how much more money the Assad and his gang have to steel before the Arabs do something concrete?
Freedom scares them so they keep working with the existing system!

hahah, it seems M14 has perfected the art of betting on losing horses.

I guess then that we should not expect to see cheikh Saad arrive through Damascus International Airport anytime soon. Too bad, really. Things have been soooooooooo boring with him absent. Can someone please ask him to record stuttering speeches and post them on YouTube? WE RE SOOOOOO BORED. Miss you, cheikh Imbecile.

I think that 2014 is way too early and I am sure that the people of Syria will object to rushing things out without even asking for their contribution to the debate. After all, they just had 2500 people massacred (which shows restraint on the part of the Lion's clan and cronies) and a few 10000 imprisoned. So we should give more time to Assad to improve on these dismal figures. At least his father and uncle Rifaat did things more radically and taught us that a good massacre starts at the 20000 human beings mark (preferably with a few thousands of children).

Give this guy a chance to improve on this record,,, and it is fair to say that Assad junior is not helped by the expansion of new technologies such as YouTube etc which are unjustly tying somewhat his hands. In order to establish a level playing field, 3 additional years to massacre his people is not enough. People of Syria, please vote with your feet and request an extension to 2016 at least!!

By 2014 there will be no people left alive in the country except the Shabiha sent by the Hezz.

There are still so many protesters left to kill nd the jail are also mow overflowing with people arrested. Please give me a month to dispose of the bodies.

None of Arab leaders that are set to go have learned the lesson yet, we start with Saddam, we go to Mubarak, and Ghadaffi then we end up now in Syria.
You really think keep killing people is going to reform and put out the fire? if someone's close family member had been massacred then he/she going to revenge, multiply the revenge cases as a worst case by 10% of those killed so far (using the eye for an eye), that is close to two hundred operations against the current regime. In the end and after lots of bloodshed Assad is going to loose simply because the people are not being protected by their army/police any longer because revenge will create revenge.

Ms. BigDig.
Please excuse my ignorance and be kind enough to indulge my naivity; would you please explain to me how in hell you reached the conclusion that Mr. Assad won?!!!! thank you in advance for your explanation.