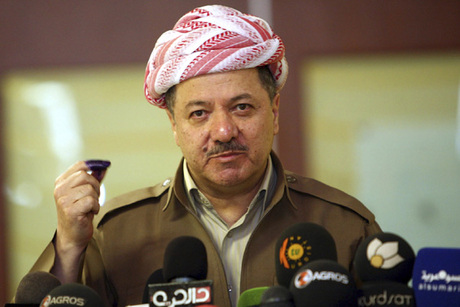 The president of north Iraq's autonomous Kurdistan region called on Tuesday for U.S. forces to stay in Iraq past 2011 to avoid a civil war, accusing Iraqi leaders of hypocrisy on the divisive issue.

"We think that the presence of U.S. forces in Iraq is still needed, and all the political blocs say this during bilateral meetings, but when they stand behind the microphone they say something else," Massud Barzani said during a meeting in Arbil with Kurdistan representatives based abroad.

"I think if U.S. forces withdraw, internal war might take place, and foreign intervention will increase, as will sectarian problems," he said.

Under the terms of a 2008 security pact, all U.S. troops must withdraw from Iraq by year's end.

Iraqi politicians announced on August 3 that they would open talks with Washington over a military training mission to last beyond 2011.

Some Iraqi leaders have said U.S. forces need to stay, including Iraqi Foreign Minister Hoshyar Zebari, who said in July that: "Is there a need for trainers and experts? The answer is 'yes.'"

But most have been extremely reluctant to call for an extension of the American presence publicly, as such a move is highly unpopular in the country.

These fears by the Kurds are very well founded since the Iranian regime has already started the Genocide against their community who are only demanding self determination and are killing a number of them within the Iraqi Kudistan border even with the presence of US and allied forces there what if the US and allies were to withdraw their forces? What would happen to these people and the rest of the other communities if they were left at the mercy of the supreme criminal in Tehran and his local sacrficial zombie murdering street thugs and terrorists the likes of the Sadr Brigades? A reason plus why the focus needs to be on saving and amassing resources to root out the Ground Zero of terror in the ME and the world i.e. the Iranian regime in Tehran and Quom.