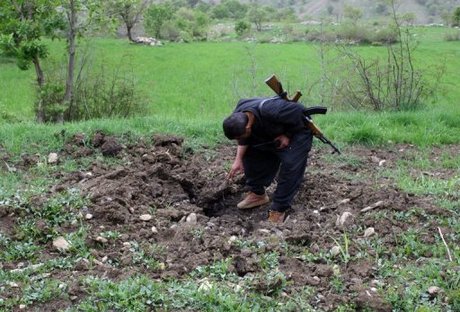 "Majid Kavian, deputy commander of the terrorist (Party of Free Life of Kurdistan) PJAK group, with the alias of Samakou Sarhaldan was killed on Saturday," September 3, the Guards said on its website Sepahnews.

The report did not mention under what circumstances Kavian was killed, but quoting a statement attributed to PJAK, the Guards said Kavian "was killed by artillery shrapnel."

The report said Kavian had been engaged in "terrorist operations inside Iran" since 2003.

In July, Iran launched a major offensive against PJAK rebels, shelling districts around Iraq's border for weeks but halted it during the Muslim fasting month of Ramadan to give the rebels a chance to withdraw from border areas.

The Guards resumed the offensive on September 2, with their operations officer Colonel Hamid Ahmadi saying the fighting would "continue until all counter-revolutionaries, rebels and terrorists have been cleared away."

According to the Guards, so far more than 30 PJAK rebels have been killed and 40 wounded in the second wave of attacks, while Iran has suffered two casualties.

On Monday, PJAK declared a truce and called on Iran to reciprocate in order to prevent further bloodshed.

Iran responded a day later, saying that Iraq's Kurdish autonomous government, which is acting as a mediator, must clarify the details of the truce before making a decision.

"Since the content of the unilateral ceasefire announced by the PJAK terrorist group is not clear-cut, the government of the autonomous (Iraqi) Kurdistan region which mediated this act should clarify the intention of the ceasefire as soon as possible," the Guards said in a statement.

PJAK rebels have engaged in clashes with Iranian forces in recent years, drawing retaliatory bombing of their rear-bases in mountainous border districts of Iraqi Kurdistan.

In mid-August, Turkey began its own campaign of shelling and air raids against bases of the Kurdistan Workers' Party (PKK) in Kurdistan, which has ties with the PJAK.