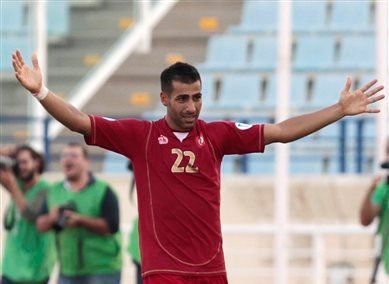 Lebanon came from a goal down to beat the United Arab Emirates 3-1 on Tuesday in the third round of Asian qualifying for the 2014 World Cup.

Lebanon, which was routed 6-0 by South Korea in its opening match in Group B, trailed 1-0 after UAE defender Mahmoud Al Hammadi scored in the 15th minute.

But Mohamed Ghadar leveled from the penalty spot in the 37th minute and midfielder Akram Moghrabi put Lebanon ahead with a close-range finish in the 52nd minute.

The home side put the game out of reach when skipper Roda Antar headed home with seven minutes remaining.

A second consecutive loss leaves the UAE's World Cup campaign in tatters, with almost no chance of qualifying for the next round. To make matters worse, the injury-plagued team from the Gulf plays World Cup veterans South Korea in its next match.

now shab, sasi, startrip, marie, small.axe and other nicknames from zionist information war department have nothing to say. of course. yesterday, zionist entity lost another football game, so they are not in the mood for football at all.

However we Lebanese are happy for sport results getting better every day, because it shows that life in Lebanon is becoming more normal every day, and people can concetrate on such trivial stuff like football

@Jabal Amel: Returning to normal? What was abnormal anyway? It's not like Lebanon was in a state of war recently...

Hmm and how will UAE react to this? Will they ban lebanese from entering the UAE? will they kick out the lebanese living in UAE? Will they torture lebanese in their prisons? This is usually how they react when someone doesnt kiss their a*s, they punish his entire nation.

Alf Mabrouk ya abtal Libnan....this time your leaders didn't force you to lose..

A new dawn, a new birth....Football managed to unite a torn country in the movie Invictus...watch it guys and aim for the same :)

Jabal, you never cease to amaze me...

THE ZIONIST INFORMATION WAR DEPARTMENT DOES NOT EXIST.

Not on naharnet it doesnt !

You should watch the movie " A beautiful Mind." You will find a lot of similarities between yourself and Dr Nash.

The only difference being that at least he contributed something positive to the world...

I was at the football game in the Sports City. I watched the game and it was great to see Lebanon, OUR COUNTRY, win.

Am i a zionist working in the information war department you idiot?

The answer is NO, just in case you're still convincing yourself.

Please stop disrespecting other members of this website by branding them zionists.